CLEMSON PROVIDES THE VERY FACE OF SUCCESS ITSELF

Share All sharing options for: CLEMSON PROVIDES THE VERY FACE OF SUCCESS ITSELF

Clemson offensive lineman Kenneth Page appeared on these internetz almost a year ago with a large stack of cheddar in his hand. This afforded much giggling to the world at large, who wondered what sort of venture a young capitalist like Page had gotten into to acquire such a robust stack of bills. Remember me? I'm wealthier than your wildest dreams.

Page may have moved on to a quiet, inconspicuous spot on the depth chart at Clemson, but his internet fame has only begun. The photo of Page has become an internet currency of its own, as evidenced after the jump. 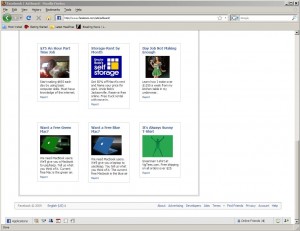 Kenneth Page made $693 a day with basic computer skills on the internet EVERY DAY! And so could you! If he's not looking for his cut of this action for the use of his image, the Page isn't half the savvy entrepreneur he led us to believe he was. (HT: JC.)