THAT, SIR, IS A NAME

Share All sharing options for: THAT, SIR, IS A NAME

College Park brings the fire with Kowaski Kitchens, who should get a scholarship for the style points he brings with him alone. 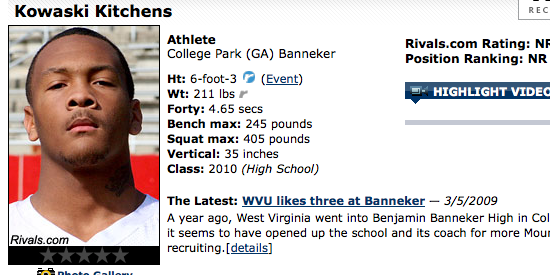 Recruiting is still not over (it's never over oh no it's never over) as Orson Charles, who could have been so much for this site and for Florida, will decide at 3:45 p.m. between USC, Tennessee, and Georgia. At this point we're rooting for him to go to Georgia or USC, if only to keep him from the clutches of Kiffykins. We're not concerned about Kiffykins' mounting threat blah blah blah...we just don't want him to spout off about the clandestine methods they used to get Charles. "See, we had Ed Orgeron execute a HALO jump to escape radar, and he lived in the woods for three weeks outside Charles' house without him knowing it. You know, just to keep an eye on him. Not a single living rattlesnake left in those woods now, by the way.