Substantials: Has beefed up to 204 pounds after coming into USC at 180, stands 6' 4", and has has a removable head for maintenance purposes: 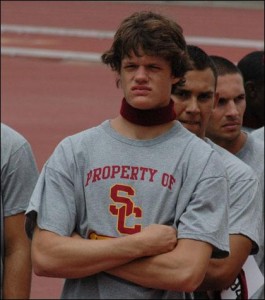 Connotations: The only quarterback that already sounds like his own evil multinational conglomerate.

Favorite Presidents: Abraham Lincoln and George Washington. Go out on a limb there, Daredevil. Our favorite president is Gorilla-Man. You say he's never been President? Yet, friends. Yet.

Benefits: Sex. We can't possibly imagine the amount of sex available to the starting qb at USC. It must be like going to Whole Foods every day and discovering that the free sample on every aisle is pussy. It must be like being attacked by ninjas at every turn of every corner, but instead of attempting to throttle you, they disrobe and unveil their secret identity as turbonymphettes determined to fry every nerve ending out of your jimmy as part of a four year course in Pants Rescue and Sextraction. Your verbs while spoken at USC as a starting quarterback are all in the same tense: the pussy pluperfect. We don't know what that means, but it applies.

You're also likely to go to the NFL even if you ride the bench, and if Matt Leinart is any indication, no amount of NFL glory compares to the worship you receive as the starting qb at USC. His entire offensive line consists of juniors and seniors, too. Fun.

Downsides. Will ruin you for other pleasures in life forever. Besides that the possibility of failing on the national stage? Absolutely no downside, especially as you're not replacing Leinart or Palmer, but merely the good-to-occasionally great Mark Sanchez. (Sentence taken almost entirely from last year's piece on Sanchez with John David Booty in the Sanchez slot.) Also has to work with the downhome new USC offensive coordinator Jeremy Bates, but expect no drastic changes in what has been a pro-style, play-action offense at USC. Everything remains keyed to put players in the draft, and that means keeping the qb under center, the wideouts NFL-tall, and the line loaded with mean-ass Samoans and blue-chip continentals who can block out their pro-ish assignments.

Prospects: Yawn. The usual excellence maligned with a midseason loss to an Oregon State or Stanford out of nowhere, the posh luxury of being the quarterback for the de facto pro team of Los Angeles sigh...all of the basics, you know. Just the standard "Babylon's Prize Man-Stallion" treatment. The sedan chair you're carried aloft in may seem excessive, but you're wrong. The sedan chair is merely luxurious; It's the flatscreens in the sedan chair that make it excessive