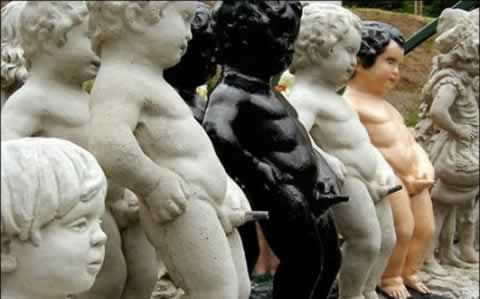 Pissing outside is great. If you really want to make a woman jealous, just pee outside in front of her. She'll likely say, AHHHHHHH WHO ARE YOU I'M CALLING THE COPS. But underneath the skeeved-out fright and cloud of pepper spray, what she's really trying to say is "Gee, I wish I could pee outside like that. It would be so much more convenient than what we have to do! And my, I'm so impressed I'm not going to press charges!"

Austin Box, Oklahoma linebacker and redshirt freshman, had at least one admiring witness to his display of male urinary superiority: an officer of the Norman PD. Box was cited for the rather dramatic charge of "outraging public decency." Whether public urination is included in this umbrella charge or if Box had "FUCK YOUR GOD AND YOUR WHORE MOTHER" written in bold letters on his penis is unknown, but it earns one point for Oklahoma in the Fulmer Cup.