The weather and cabin fever prior to spring practice can only be blamed for the psychobilly freakout that occurred this weekend in an active Fulmer Cup scoring session. The Big Board is updated and brought to you by Brian, who is hung like Reggie F'n Nelson. 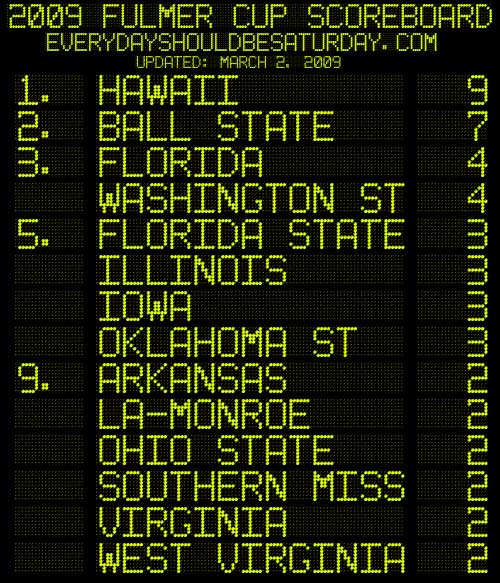 Ryan Mallett learns the Arkansas qb playbook. The Matt Jones one, to be specific. Ryan Mallett takes an epic mugshot in his arrest for public intoxication in Fayetteville this weekend, earns Arkansas two points on the Big Board, and gives Michigan fans further reason to crow that losing the blue-chip wunderkind was no real loss, after all, as he's the kind of guy who will smirk but not outright smile during his mugshot. (The smile indicates you're just insane; the smirk implies 'smug.') Bobby Petrino responded by interviewing for the Saskatchewan Rough Riders' head coaching position. (Score equals one point for public intox, and one bonus point for the mugshot mugging.)

(There's a cheaper way of doing this, and it's called blogging.) When Prater blew a .134, he responded with this perfectly understandable explanation:

Prater told police his bartender must have put alcohol in his Coca-Cola, the report said.

Buck-high. Two Ohio State linemen get nabbed with "drug paraphernalia" in their car, a tantalizing charge since we'd love to see the broad definition of what qualifies as "drug paraphernalia" in the eyes of Ohio State campus police: Visine, a reading list from an English major's classes, a sleeveless t-shirt, or anything else subversive you'd like to go ahead and tell us you have in the car, hippie. Each count gets a point, giving Ohio State two points in the Fulmer Cup and insuring that Ohio State never gets on the board for anything but minor marijuana offenses in the contest for the third year running.

Nebraska won't make the big board for this, but TE Ben Cotton was cited for having a piddling .085 BAC in a dorm this weekend. That is enough for a single point, not enough to make the board, and certainly more than enough to get at least one coach on his ass in an unholy manner in spring drills. His father, Barney Cotton, is the Cornhuskers' current offensive line coach, and owner of a striking lipstripe .

USF: Even Our Film Guy Is Leavitt-Intense. USF's film guy may be charged in an alleged scuffle with a student. No points awarded, but we point this out just to show that if you're going to work for Jim Leavitt, you've got to be ready to strike at any moment at any time for any reason. (Perhaps a reason they're having difficulty filling the defensive coordinator position: there are so few DCs with cross-disciplinary experience in Muay Thai, Jiu-Jitsu, and Greco-Roman wrestling.)