MIAMI QB RIDES FISH AND WAFFLES TO POUNDS OF VICTORY

Share All sharing options for: MIAMI QB RIDES FISH AND WAFFLES TO POUNDS OF VICTORY

One glance at the menu backs up the slogan. Fried chicken and smothered chicken wings. Pan Sausage. Liver and grits. It's all food, as one of your older relatives likes to say, that "sticks to your ribs. 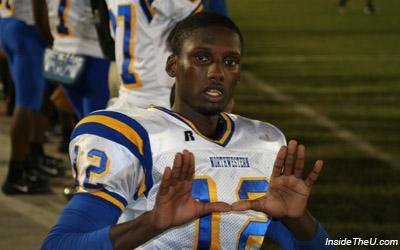 I want an extra waffle THIS big.

Goddamn, that sounds good--even the liver and grits, which for some reason would be delicious in Miami, since for some reason anyone from Miami has the ability to competently prepare the filter-gland and make it taste way better than a body's version of an air-filter has a right to taste.

It would sound a lot better if whole pieces of it didn't bypass the digestive system entirely and take up residency in your colon, brain, and aorta, but who the fuck cares: you have to die someday, and doing that without completely wearing out the warranty on the equipment makes as much sense as letting your car die from old age and not from being wrapped around a telephone pole in a fiery 80 mile police chase. Harris is pounding the fish platter and extra waffle to bulk up, as qbs are following the over all trend of getting larger to absorb the pounding they're taking from the even more swollen likes of linebackers and defensive linemen.

(Willy Korn is the heaviest qb in the ACC at 220, but 30 pounds of that is his cock, because Willy Korn is awesome because his name is Willy Korn, and saying his name in a mantra-like fashion has POWERS.)

He may have to take more of that, too. Miami wants a more "pro-style" feel, which by definition means more formations and more concussions for the quarterback, fewer points, and a vanilla playbook camouflaged with a zillion shifts and one yard runs on first down.