FOOTBALL ANALOGIZING: THE LEAD OPTION OF A DRUNK EVENING IN DC IN 2004

Share All sharing options for: FOOTBALL ANALOGIZING: THE LEAD OPTION OF A DRUNK EVENING IN DC IN 2004

Football is like life: it has a playbook, and when it breaks down, people get hurt. Enjoy.

The play begins thusly. We play the part of the quarterback, labeled here as O/S. The idea: to successfully pitch our way through an evening of socializing at a party in DC with the pitchman, our friend the local DC-ite and aspiring political lizard-person, trailing the play. (You ask: how are you friends with a person-lizard? Simple. You just feed them lettuce just like an iguana, and they'll be your friend forever.) 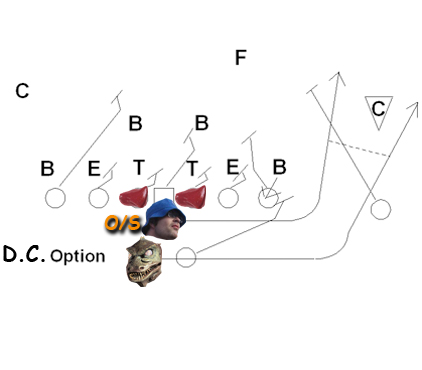 The design of the play is simple: the blockers here are played by our liver and ability to make small talk. They will block the dangerous elements of the defense in order to free movement throughout the party, and if needs be the pitchman will take the ball of conversation or social interaction when alcohol or the awkwardness of discussing anything with the half-reptiles at this largely politico-style party.

(We apologize to the non-reptiles reading this piece who dwell in DC. All seven of them. Stay frosty on the streets, as the business card assassins are forever on the prowl for fresh meat. Or lettuce. They're not picky.) 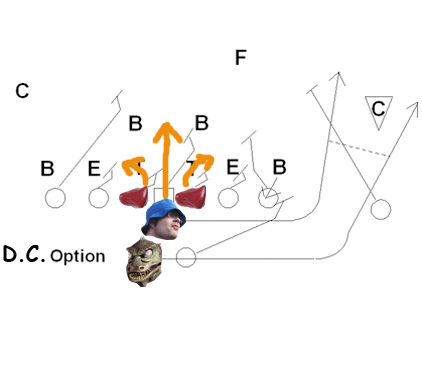 So, with the consumption of four large solo cups of gin and tonic, we're off the line. Note that alcohol and social awkwardness has been cleanly swept off the line at this stage in the play, and that everyone's assumption that we work in the same field as they do (and thus can be of some benefit to them) serves as a fullback dive, bringing in the linebackers. We're free and clear, and schmoozing our way towards the endzone of a comfortable night crashing on the living room couch slightly drunk with ease.

Signs of trouble appear, though: 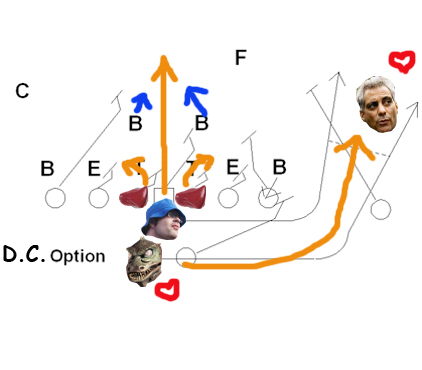 "C" must be blocked here. "C" here denotes "Potential Love Interest and Good-Looking Political Type Guy," and will be played by the head of Rahm "Rahmbo" Emanuel. (It wasn't Rahm Emanuel, for the record.) Our pitchman, a single female friend from way back in high school, is suddenly interested. We've lost our blocker, and as qb must deal with an option that has suddenly become an option keeper whether we like it or not. Solo in the defensive backfield with defenders bearing down on us, the situation quickly becomes one of survival.

A savvy qb would step out of bounds at this point and get off the playing field of drunk socializing, living to play another down. This was not what we did, which was to double down on the speed and hope to outrun defenders. On this play, that means accelerating gin consumption and attempting conversation about something humorous and non-political in an party in DC.

As the following diagram shows, we neglected to notice the safety of our gin threshold bearing down on us from the periphery. Working alone in the backfield without a pitchman, we make it just a few steps into a conversation with a Navy demolition diver before disaster strikes: 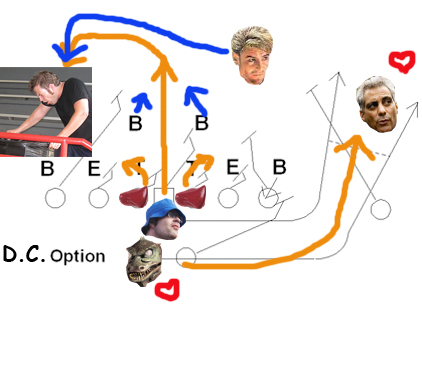 The safety--imbalanced blood chemistry and ill-advised powerdrinking on an empty stomach, played here by the very embodiment of gin itself, Peter O'Toole--hammers into us like Andy Katzenmoyer powdering Corby Jones' jaw. The quarterback spends the next 45 minutes retching on his knees in the bathroom, a victim of poor play-execution and tenacious defense by basic physiology and awkward socializing.

The option, when run effectively, is unstoppable: but a moment's lapse in the scheme can lead to disaster, as it clearly did for our hero here, who woke up the next morning looking for a city bus to crawl under and die, but found that direct sunlight caused unbearable pain preventing this plan from occurring.

If you have a play from your life you'd like us to plot out, please email us at harumphharumph of the gmail variety. Perhaps we'll use it.