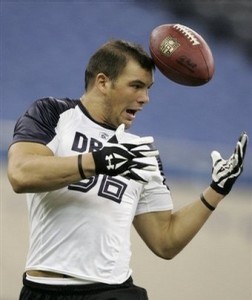 (Before you ask: We will never tire of this photo. Ever. We pray to Football Jesus (there's a separate one for football) every night that Zibby goes into coaching so we can post it once a week.)

Moving on: The combine, like childbirth, is a natural process, a rite of passage, and not at all creepy or gross. Nope:

With that, the player is ready to run. He peels away a pair of mesh shorts and the compression pair underneath reveal a set of quad muscles akin to a mountain ridge. [NorthJersey.com]

"In between workouts and class, I usually get a massage, have a chef come over to prepare meals, and different stuff like that," said Freeman, an OSU senior linebacker. [The Lantern]

But what's not true, he says, is the unavoidable association between Berkeley and marijuana -- "Come on, man, you lived in Berkeley -- tell the truth," a scout reportedly said to Follett in an interview after he had denied ever smoking pot. [The Daily Cal]

"Everyone wants to talk about (Georgia's) Matthew Stafford , I've been at camps and thrown with him," Hoyer said. "But I feel like my arm is just as strong or just a little bit below his." [Detroit News]

"[Loadholt] struggles to bend, and he struggles with any kind of elite speed. Orakpo ran by him all day long." [Tulsa World]

The doctor looks at my sheet and said, Did you actually play? I told him I was a long snapper. Yeah, I just snap and take a leisurely jog down the field. [Freep]