Share All sharing options for: FULMER CUP: YOUR RIGHT DOOR IS AJAR

A moderate ovation for Ball State, making a name for itself as the class of the MAC in the offseason as well as on the field. Their starting kicker Ian McGarvey got hisself locked up this weekend for DUI. 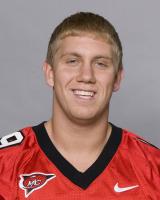 The officer told McGarvey police received a call about a suspicious vehicle that matched his car. McGarvey - who did not look at the officer while talking - said he did not know why someone would report him because he was driving normally, according to the report.

That's 2 points for the DUI, with an additional 1 point tacked on for McGarvey's tender age of 19 and attendant underage consumption charge.

[HT: The fine folks at Over the Pylon.]