IT'S NOT RIGHT, BUT IT'S OKAY

Share All sharing options for: IT'S NOT RIGHT, BUT IT'S OKAY

That The Humanitarian only wants what's best for his angels is a fact disputed only by cads and ne'er-do-wells. If no one's saying he's crying into his pillow at night over losing Sanchez, that's only because Carroll never sleeps. But going on the record a month later and saying early-departure quarterbacks have a 62% failure rate? That's just cold, girl. 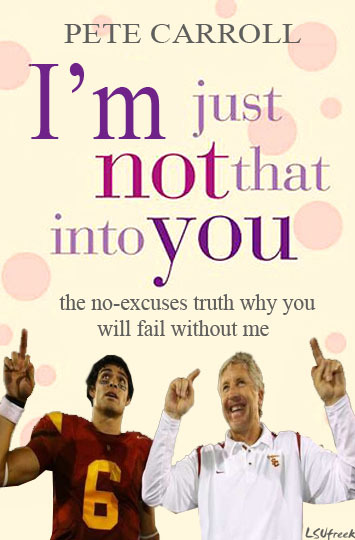 Sanchez, by the way, has gotten the hang of the oh-it's-just-about-the-game two-step with a quickness that would make FaRve proud:

If a quarterback sends the wrong message at this week's NFL scouting combine in Indianapolis, it can cost him $10 million or more.

That's why USC's Mark Sanchez and his handlers are especially careful these days about the signals that he's sending. With the top of the draft still very murky, and Sanchez a legitimate candidate to go No. 1, everything counts -- every impression he leaves, every word he utters, and every minute he spends preparing to wow talent evaluators.

His message: Forget Tinseltown, I'm all about football.

"There's a lot that comes with being an 'SC quarterback," said Sanchez, who was initially reluctant to be interviewed because, he said, he wants to stay under the radar before the combine.

Emphasis ours, because the day an SC quarterback is serious about shunning the spotlight is the day the football monopoly in Los Angeles is actually over. Well played, young sir.