Share All sharing options for: TALENTED RUNNING BACK SUSPENDED. AGAIN.

Cecil Collins, oh, for the things you could have been had you not decided to break into apartments and strange women sleep. Collins smashed bones to pieces for one hot streak of games in 1997 before breaking his leg, and then deciding the best thing to do with his spare time was entering apartments not belonging to him and cuddling with women. He wasn't a molester; no, we prefer the term "cuddle bandit," instead, as it sounds so much more jaunty.

Collins was then booted off LSU, transferred to McNeese State, and then played for the Dolphins before another "snuggle attack" got him a 15 year jail term. He remains the apex of the phenomenon of an unassailable equation in college football: the more talented a running back, the more likely he is to do stupid shit to take himself off the field in one way or another. 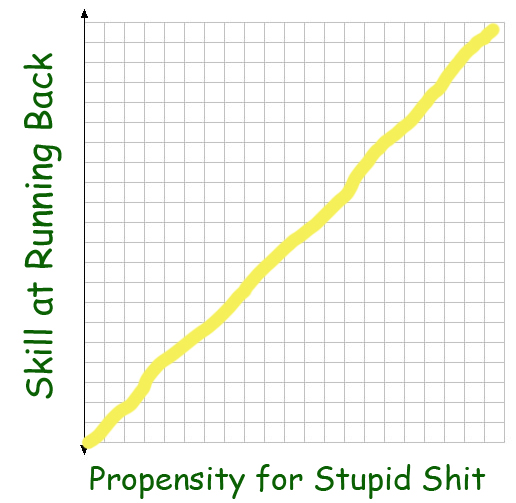 Enter the case of LeGarrette Blount, suspended from the Oregon Ducks for what are likely academic issues. Blount is everything one could want in a running back: freakishly fast for his size, immense, possessed with the leg strength of kodiak bear fond of spending time in the squat rack, and capable both of annihilating defenders and using them as plush cushions to soften his falls and keep plays alive.

Blount is embarrassingly talented, and in the SEC or Big 12 would have small shrines built to him in side yards around the region. And because of this, he's done something to take himself off the field. Don't blame him, blame math. Running backs too good for this earth fall prey to it every time.