A PROUD TASTE FOR ORANGE AND MINIVER

Share All sharing options for: A PROUD TASTE FOR ORANGE AND MINIVER

[hit play, then read on for maximum effect]

If you're of orange-and-white extraction and a relative young'un like me, you've enjoyed respectable if not notable football success for most of your cognizant life. You are also threatened by change, and you may not know what to make of this young whippersnapper Kiffykins strolling the sacred halls of Neyland. He's arrogant; he's got a funny accent; he delivers his addresses like an under-prepared sixth-grader giving a book report, and oooohweeee, has he ever stirred up a hornets' nest in the papers.

But here's a fun little test. On one side of an argument are Paul Finebaum and Gregg "Greg" Doyel; on the other, Bruce Feldman and Matt Hinton. Who would you rather have in your corner?

Finebaum:
I flipped on ESPN over the weekend and heard a national commentator refer to UT's 33-year-old football coach as "Insane Lane." Certainly that had to make an impression on upcoming high school seniors who might be considering UT in a few months.

Doyel:
A sharper coach, one with a better feel for himself and his business, wouldn't go out of his way to tick off the one guy in the SEC who has the players, the style and the cruelty to get even on the field.

Feldman:
...do people really think because of this, Florida is going to REALLY try and rub it in UTs face? Meyer was going to try to blow up the scoreboard regardless.

Hinton:
So even though I have no idea how many games Kiffin's going to win this year at Tennessee (well, I have some idea), on some level I have to think anyone able to cause rival scribes to spill this much ink and drive a usually sensible Alabaman into the arms of Al Davis before his first spring game at a school that just went 5-7 with a loss to Wyoming must be doing something right.

Look, it's February. We're all hurting for content. But Finebaum is clearly set on ginning up pageviews in the lean months, and Doyel is flat acting the fool. The idea that the Florida-Tennessee rivalry, in particular, isn't operating at a full-time haterade zenith already is frankly preposterous, and while I don't expect more from Doyel, his readers should.

And what if they're right? I have often said that, were I not born into a through-and-through Tennessee family, I'd like to be an LSU fan. I admire their joie de vivre, their willingness to bodily threaten women and children of opposing fanbases, their sheer cussedness that is never altered by numbers on a scoreboard. We orange faithful could stand to learn from the fine example of Baton Rouge. Too long have we meandered along in (relative) gentility, content to cheer lustily when games go our way and fall dead silent when down more than a touchdown. 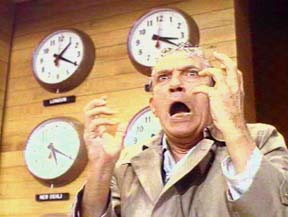 Brothers and sisters, it's time to relinquish the mantle of "the Michigan of the SEC". Let's see some hustle in here. Let's see some fire in those dead eyes. Let's see us trailing the Gators, the Tide, the Dawgs by thirty or more and screaming, "THAT ALL YEW GOT??" at their nearest fans. And in the meantime, let us laugh long and proud at all the ruffled petticoats Kiffykins is leaving in his wake. His apology to Meyer was deemed half-assed and disingenuous by everyone with a hot mic? GOOD. The man is fantastic television, and for this bounty of offseason entertainment, at least, we owe him our allegiance.

He's young. He's inexperienced. He's running into walls left and right, but bless his heart, he's doing it at full speed. Would we really want it any other way? Kiffykins may very well get run out of town on a rail, but if he goes down he's going Cossack-style, and in the meantime he's ours. Think for a moment and name the most hated men in the SEC: Meyer. Saban. Miles. Anyone sensing a pattern here? Now rejoice, damn you, Knoxville---we done got our very own prince of darkness. Freshly hatched though he may be, I f'ing love him for it.

Vawls, our path diverges. From here on out, I'm gonna have some fun with this. (To wit: I just compared Lane Kiffin to the head coaches of Florida, Alabama, and LSU; it was not an accident, and you can go to hell and die if you think we're not beating them all a billionty to three (and Georgia, too) at the very next opportunity. See? I'm telling you, this is the only way to live.) I hope to see many of you spitting and hollering and damning the torpedoes from here to August and beyond. The rest of you---well, if y'all like being pantywaists so damn much, I'm sure Vandy's bandwagon can spare a few seats by now.