STAND AWAY, AMATEURS. WATCH KRAGGRO GET THIS.

Share All sharing options for: STAND AWAY, AMATEURS. WATCH KRAGGRO GET THIS. 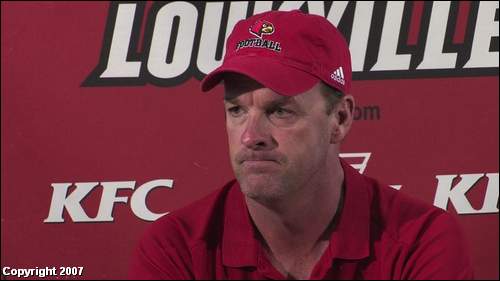 Steve Kragthorpe thinks he's got the solution for what's ailing the Louisville football program, and it's as simple as two sweet words: more Kragthorpe. The man, the adjective (KRAGTHROP'D), the coach, and the legend will be taking over the reins of offensive coordinator for 2009.

Except for assuming a coordinator's role on top of being head coach, yes: nothing's changed, sir. The move comes after Louisville appeared to have struggled for one year on offense...

...but in reality, the averages in the Kragthorpe era have been lopsided, and skewed by racking up 70 against lessers while struggling in their Big East schedule to score the doublejumbo points of the Petrino era in conference. Louisville, in case you don't follow every hiccup of the Big East with the intensity of a thousand unsleeping eyes like we do (er...), finished 1-6 in conference and lost to GERG Robinson and Syracuse.

Former offensive coordinator Jeff Brohm will move to Florida Atlantic, where he will focus on developing quarterbacks and learning to appreciate a fine pair of suspenders and the earthy, seaweed-y reek of a fine single malt. ("Have you had scotch? It's TERRIBLE.")