YOUR LATEST DAUPHIN IS NAMED AT MARYLAND

Share All sharing options for: YOUR LATEST DAUPHIN IS NAMED AT MARYLAND

James Franklin will be the successor to Ralph Friedgen at Maryland in the latest naming of the Dauphin, or if you like to think of it more crudely, he'll get a shot at the girlfriend after Friedgen finished up with her in the next year or two. Was it smooth vomit, or the chunky kind, or a nice middle ground? Apologies. Turn the laptop upside down and commence shaking for a moment. 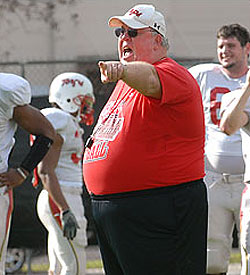 Also finding new work of sorts: Tony Franklin, the textbook-writin', Hugh-Nall fightin', Tuberville-indictin', pink-slip kitin' offensive coordinator who, after his ignominious departure from Auburn, has now found employ at Middle Tennessee State. He credits his success in the interview to actually shaving, since the last time we all saw Franklin he looked like he'd just gotten through huffing Krylon through a filthy rag for three days straight and sleeping in the crawlspace of the Auburn football offices.