There's good places to take a nap in public. We prefer the chairs some kind retailers put out for sad husbands to hold down while wives or girlfriends browse clothing and suffer minor cycles of breakdown/affirmation. It's a bit like going to community theatre; if it's dark enough, you can nod off comfortably while your significant other passes through the entire dramatic cycle in ten minutes over a single pair of pants.

A bad place to fall asleep is in the drive-thru lane at McDonald's, which is where Preston Parker of Florida State fell asleep Saturday night. (Bobby Bowden: "He diyud, he diyud...but he's a good kid.") Parker was arrested for "driving under the influence of alcohol and/or drugs," and admitted to drinking and smoking marijuana. 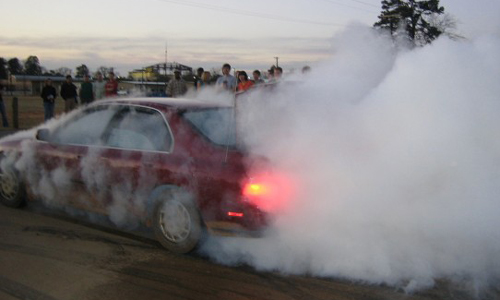 This leads us to the hilarious disclosure of this delightful piece of police report verbiage:

According to police, Parker's blood alcohol content below the state's drunk-driving limit.

However, Parker's urine sample was presumptive positive for marijuana.

Oh, the endless number of people we could include under the title of "presumptive positive" for marijuana: Percy Harvin, George W. Bush (why the fuck not, sir?), anyone who just shook hands with L'il Wayne, Penn Wagers, Charles Haley, Christopher Buckley...this "presumptive positive" is going to be useful phrasing, as in "Tommy Bowden's teams at Clemson were usually a presumptive positive for bitch mentality." Muchas gracias, Tallahassee PD. We'll honor you by passing out at the driver's seat in the line at Zesto's soon.

Oh, and Preston Parker puts FSU at the head of the drive-thru line for the Fulmer Cup with this three point offense: two for the DWI/DUI/whatevs, and one style point for falling asleep while waiting for his McRib.