A phone rings in a large, darkened house in Ohio. A worried looking woman picks up the phone.

Man's voice: Don't worry about me, sweetie. Say hello to the poodles for me.

Man's voice: Oh, pooky, I love you too. See you in ten days.

[he hangs up. The wind howls indifferently outside.]

SCENE: The high plains on the Bamiyan Plateau, Afghanistan. Desolation. An encampment of tents surrounds a single well on the blighted landscape. SHEIKH MASOOD reads from the Chinese menu in his hand. 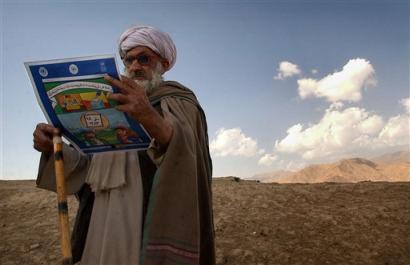 MASOOD: There's no way they will deliver us our food out here.

PASHTO: But they promised delivery, no matter our location?

MASOOD: We shall wait another three days, and then cancel our credit cards.

A loud uproar goes up behind them.

They turn to see the dogfighting pit, surrounded by Afghan men in half-turbans and baggy pants. Each bristles with weaponry and facial hair. Dust rises from an unseen fracas in the middle of the ring. The noise of man and dog fighting can be heard clearly even from a distance.

MASOOD: Has the Scarlet one joined us again?

PASHTO: Yes. For the eleventh year running, he has joined us, Sheikh Masood.

PASHTO: Yes, his passport. He said he has no need for it where he travels.

MASOOD: Was he in his customary state?

PASHTO: Yes, Sheikh Massod. Ragged. Covered in dust and blood. Arrived on horseback at 2 in the morning last night and lay in his tent all night screaming for women and opium. He went into the ring at 8 this morning, and has not emerged since.

MASOOD: He has demanded nothing...unusual?

PASHTO: No. He has only asked for more dogs to fight to feed that which never sleeps within him.

MASOOD: Allah help that man. I see angels in that man's demoning, I do.

PASHTO: Yes, Sheikh Masood. I do, as well.

MASOOD: He brought only his dog and African this time?

PASHTO: Together, the Scarlet One and his dog have killed all they have fought. I have made much money from their fighting today.

MASOOD: As have I, Allah be praised. Come, let us watch their rage.

MASOOD: He lives only for blood and mayhem and the singing it puts in the blood. To see this...it chills the blood. Allah never saw a more pure killing machine, Pashto.

PASHTO: No, Sheikh Masood. Allah help us if we do, though.