Oh, you picky, picky bitches at the public editor's desk. You first take away our beloved Jayson Blair; then you tell us tales of "girls romancing each other" may just be the unverified, undocumented, and possibly fictitious ramblings of an over-recruited college athlete.

Orangebloods already had a fine rebuttal to the New York Times' article by Thayer Evans on the recruitment of Jamarkus McFarland whichm while not exactly clinical in its approach, was certainly enough to poke a few holes in the story. 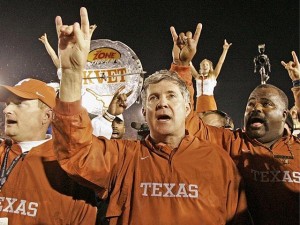 We at Pajamas Media think you have unfairly cast Mack Brown as a Satanist with this photo!

Now the NYT public editor decides to just pee all over the best passage of the story by confirming the lack of confirmation on the story. BOO REPORTERY THINGS:

Evans did alert the university just before his article was published on the newspapers Web site. Why didnt he seek reaction beforehand? He said that if anyone at Texas had spoken to him, it would have violated N.C.A.A. recruiting rules. And, he said, he did not want to give either Texas or Oklahoma information they could use to try to influence McFarlands decision.

I felt like we made the best efforts we could under the circumstances, Evans said.

Regardless of whether Texas officials would have commented, Evans should have given them the chance. As in each of the other cases, a phone call could have headed off much embarrassment.

Hrmgnnmppmhhh...you could say that a reporter has to bend over into pretzeloid shapes to present both sides of the story, yes; or you could say that Evans depicted this kid's recruitment from his perspective, put it on paper, and then let the reader make up their mind.

We agree wholeheartedly with the idea that he should have gotten Texas' comment on the "girls romancing each other" story, but going too far to get equal coverage in what is essentially a narrative piece presenting one recruit's subjective experience is asking a bit much.

We came away from the original piece thinking that the idea of someone seeing girls making out with each other at any college recruiting party is more than likely, and that McFarland's mother sounded like any other of a thousand recruiting mamas whose sense of self-importance had been inflated ten thousandfold by the recruiting process, and who had decided her son was going to Oklahoma long before the recruiting process ended. These are people: ego, lack of perspective, lies, and exaggerated regard for your own opinions are the givens, not the exceptions.

Aside from the single error of not including a parenthetical verification of the story, finding outrage in the story on the part of a Texas fan--or any other fan, for that matter--seems like a case of willing or unwilling shitty reading comprehension. Read between the lines of the piece, and you'll see what you see in most recruiting cases: people overwhelmed by the situation who respond as people usually do, which is in mediocre, average, and spotty fashion.

What more did you want? Evans putting a complimentary picture of Mack Brown saving a puppy from being crushed in a hydraulic press in the sidebar? You can't worry about people as stupid to believe the cartoonish picture of Mack Brown as portrayed by McFarland and Adams in the article, an egomaniacal coach a few degrees shy of Jerry Jones, a portrayal at odds with almost every other single portrayal of the man we've ever read. (And make this distinction: that is not Evans' portrayal, but is instead Adams and McFarland's depiction as relayed through Evans. Again: shitty reading comprehension in the service of an outrage gland looking to flex is still shitty reading comprehension.)