Share All sharing options for: EYEWITNESSES CORROBORATE: DRUNKENNESS CAN LEAD TO BAD THINGS

We have an anonymous account of the poor, wretched sorority girl who beshat herself at the national title game, and we found it intriguing both for its clinical description of the situation, its veracity, and its sympathy for the poor girl involved--whose picture may no longer appear on Georgia Sports, but whose image is still burned into our forebrain.

Our own commentary is interlaced in between the italicized account. Remember: drinking is an adventure. Some adventures end with you holding the Crystal Skull and riding into the sunset on horseback victorious. Some adventures end with you hopeless and broken on the rocks with vultures pecking at your insides while you look on in mute horror. (See: Carrion Death, one of the most unintentionally funny Tales from the Crypt episodes ever. Kyle Maclachlan can act!) 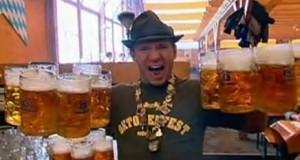 Image result one for "alcoholic adventures," and a much kinder image that the one we could have used here.

My buddies and I were tailgating when one of us noticed this girl popping a squat and peeing -- or so we thought. The worst thing about it? She was 15 feet from two toilets.

We will state for the record that the toilet situation outside Dolphins Stadium was bad, but not abominable.

TCOAN said the women's toilets were overflowing, leaving us to believe most women did their business braced against the roof of the port-o-lets and bombing away from a high-altitude squat on the toilet paper holder and men's urinal spout mounted on the wall. Doing this was not totally unreasonable. Continued...

We laughed at her, and when she was finished, she came over and tried talking to us. This did not go as she planned. Meanwhile, we have no idea she's shit herself. So she's standing there slurring some story about her
sorority sisters and being lost, when one of my buddies starts giggling like a girl and motions for me to look at the streak on her leg. She shat herself.

Of all the past tenses in the world, "shat" is without a doubt the most satisfactorily used. It just feels good to say it.

We all pulled away from her Demps-like. Even Rainey would've had none of this girl.

Meaning they pulled away from her at 4.2 speed. Impressive.

Then we looked at the spot and, sure enough, there were shits for about five feet -- look at the picture, there are turds in the grass to her left. So she started shitting while she was walking! If she hadn't gotten it all
over her leg, I would remark that this is a skill I've not mastered.

Good lord, that's drunkenness cubed. We've done many things while drunk. We've wandered around a party completely naked and attempted to play a grand piano while hammered. We've urinated in full view of an entire Chinese neighborhood. We once ate three hot dogs and let someone punch us in the stomach (yielding explosive, horrifying results.) Never, though, never have we beshat ourselves while sailing with the Captain, roaming the woods with the Deer Hunter, or patrolling the soft grassy plains of Vodkaland. That is a level of drunkenness that, like the final, dark levels of Star Wars: Rogue Squadron, we will never play long enough to achieve. We're caught somewhere between congratulations and condemnation.

But as she made a mess of it, she deserves credit only for the attempt.

Agreed. The Russian judge deducts all points, but the British judge does toss a few sympathy points your way, lady.