VIDAL HAZELTON GETS THE MARVE TREATMENT

Share All sharing options for: VIDAL HAZELTON GETS THE MARVE TREATMENT

The yearly tweaking of the rules is now on the docket, and let us humbly propose one rule in sore need of tweakage: the transfer rule, a bit of earth-salting schools may use on recruits who transfer out of programs. Robert Marve received an especially poxy variant of the treatment, with Miami refusing to allow Marve to transfer to an ACC school, in-state, or even to an SEC school. Now, it's USC transfer Vidal Hazelton's turn for a dose:

Vidal Hazelton, the former USC wide receiver from Staten Island, has been barred from talking to any Pac-10 teams and Notre Dame in his search for a new school, the Torrance Daily Breeze reported on Thursday. 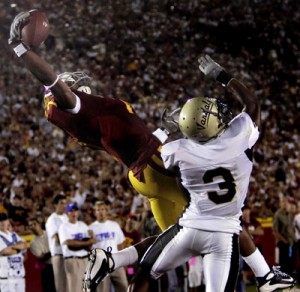 Well, transferring to Idaho is still on the table.

Hazelton's from Staten Island, NY, so declaring West Coast verboten likely isn't that big a deal for someone wanting to transfer closer to home. That's not the point: Hazelton should have the right to transfer wherever he can get an offer, and USC shouldn't be allowed to hold him once he's made the decision to transfer. The year penalty--or some variation thereof--makes sense to discourage transfers, but restricting where a player goes after the transfer makes not using the word "chattel" very, very difficult when talking about players' relationship with schools in the NCAA.

In sum, it is a crappy situation. (Hey, at least Florida crapped itself in an individual case, as opposed to 22 players doing it all at once on the field at home against Alabama and in Jacksonville.)