See, John Parker Wilson stands at a bar at Bourbon Street, and he's wondering what to drink. There's a lot of beers, see. Tons of them. There's Abita Amber, Abita Turbo Dog, Bud, Bud Lite, Corona, Coors Light, Harp, Guinness, PBR. So many options! He's just about to decide, he's looking, he promises he is and he's looking....he reaches his bruised arm into his pocket to get money.

The bartender asks: "What do you want?"

And in the moment, just when John Parker Wilson is about to decide, he is tackled by three defenders wearing Utah jerseys. They take his money and mock his bangs before heading to Pat O'Brien's to drink Hurricanes until their eyes cross. 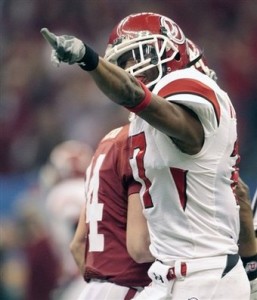 Oh, go ahead and laugh and lean back in your chair and lean back on that most Alabamian of nostrums, "There ain't no answer for power football." There is: tt collapses in the face of more powerful football played to nasty precision fueled by a level of infectious anger that, to the disloyal objective viewer, had to convert you to rooting for the Utes by the second quarter.

Award Utah a fourth of the national title. This is not 2004 Utah, a team that turned a fluffy schedule and a victory over a palsied Pitt team into an undefeated season. Utah beat 5 ranked teams and embarrassed the SEC West champion. They did not lose a game this season. They had a defense that dealt out harm to all they faced and boasted one of the more accurate quarterbacks in the nation. They beat people with spread-option tactics executed with wishbone brutality.

If you want more from a team, you're either unreasonable, a total flaming asshole, or both. In lieu of a playoff, we have to resort to fractions, and to be fair: one fraction is just as good as another.

Therefore, the gold coin of the national title this year will be delved out in pieces of eight. Utes, you get at least a quarter for perfection achieved against quality. This may seem unfair, and it is, but in this most imperfect of college football worlds, unfair desserts are the only dish on the menu.