Peter and ourself will be renewing an annual tradition of broadcasting our alcoholacast of a bowl game. The way this works: we get alcohol, set up some rules, and then broadcast the two of us regretting our decision for two hours as we hoark down far too much booze for a weeknight. Last year, during the Independence Bowl, we started slurring our speech more than usual. The goal this year will be to get weepy and confessional before TCOAN cuts off the mike. ("NO! I'm about to tell them where I put the body, baby! I CAN'T LIVE WITH THIS.")

The rules are open to debate before our final announcement post tonight, so the proposed rules thus far for our Alcoholocast of tonight's Oregon/Oklahoma State Pacific Holiday Bowl are:

Take a sip if:

--They show that goddamn whale. 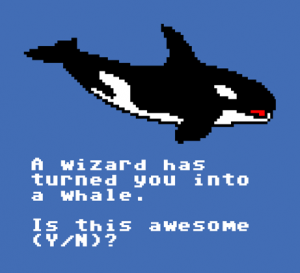 --Chris Fowler gets huffy.
--Jesse Palmer happily admits to not knowing something.
--Craig James goes WOOOOOOO!!!!
--An Erin Andrews sign is shown
--A graphic makes a whooshing or metallic sound.
--References to Oregon's uniforms are made.

Take a full-throated glug for:

Finish your drink for:

Your submissions are solicited and encouraged below.