PAUL JOHNSON GOT A MICROWAVE, TWO BRICKS AT A TIME

Share All sharing options for: PAUL JOHNSON GOT A MICROWAVE, TWO BRICKS AT A TIME

We refer not to the street pharmaceutical bricks, but to bricks of gold, which we're certainly hoping Paul Johnson isn't putting in microwaves, because unless you have a high-speed camera behind a blast shield of some sort that won't end well at all. ("Time Warp:" now on Discovery just to admit that after 9:00, 30 percent of the viewing audience is high as fuck and looking for mindblow.)

Johnson took one season at Tech--albeit a 9-3 season in year one with someone else's personnel--and was granted a seven year, $17.7 million contract paying $2.3 million in 2009. The deal makes Paul Johnson the highest paid coach in the ACC, which means he would be the seventh highest paid coach in the SEC. (See here; Kiffykins is allegedly being paid 2.35 mil in year one, and the rank for Johnson as a hypothetical SEC coach on this scale could fall depending on how many GIGGITYbucks they threw Houston Nutt's way in his contract renegotiations.)

The lesson? Beating Georgia is profitable, and as always, passing more than 15 times in a game is for little girls. 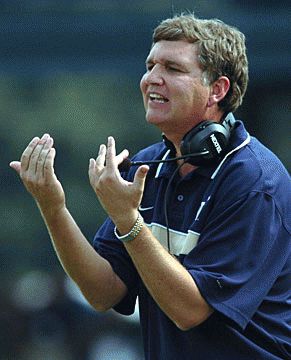