Share All sharing options for: ROCK ON, DAN HAWKINS

Dan Hawkins is entering a tough space as a head coach. It's year four of the Hawkins regime, a full cycle into recruiting, team-building, and the long, arduous process of putting your imprimatur on a program. He's survived putting his son at quarterback, putting only two conference wins on the board this year, and the bluster of his own very lofty expectations. One would think you might tamp things down a bit, but BROTHER THAT'S NOT HOW THE HAWKSTER PLAYS IT:

Dan Hawkins is raising the bar - significantly - in anticipation of his fourth season as the University of Colorado's football coach.

At the team's annual seniors awards banquet Sunday at a hotel in Broomfield, Hawkins' closing remarks included this forecast for 2009: "10 wins and no excuses." 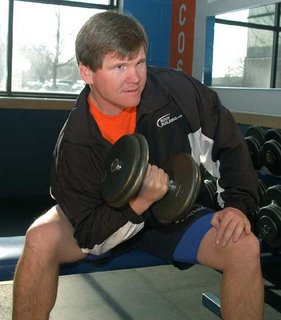 It's proabable--Colorado's 2009 schedule includes some extremely easy games on the slate. Still, Dan ain't switching to the kind of coffee that doesn't fire you breakfast out of your tailpipe in whole undigested chunks yet, even if he should GO PLAY INTRAMURALS SWINDLE.