Share All sharing options for: YOUR SCHOOL'S UNIQUE AROMA

They're creating designer fragrances for each school. Since we haven't visited every campus of the football teams we follow, we have to rely on their football programs as the chemical basis for the scents we've created for them.

L'Hamme, By Charlie Weis. Redolent of ham, flimflammery. Pricing available upon request, but on the DL we'll tell you that it will cost you $20 mil a bottle. 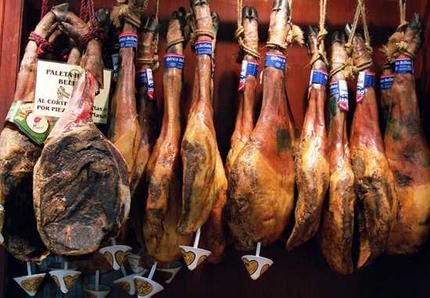 It's like a nose full of ham...and the Sheraton Hawaii Bowl.

'Cane Mutiny: Ladies, proceed without fear of offense. Because they have no offense. Smells strongly of bowls in the Mountain and Western time zones.

Nights in Dave Clawson, only from Designer Impostor.

Hearts in Dantonio: An opening bouquet of cussedness, following notes of burning tires and sandalwood, finishes with strong tones of existential rage and despair. Bottle comes with free tie.

Dab o'Swinney: We can't really identify any of this shit, but it sure looks like it belongs on your dressing table.

Kiffykins For Her, by Sanrio: Triple-distilled rosa damascena water.

Patern'eau: Redolent of Old Spice, cappicola sausage, old books, and with just a hint of Feiffer's Theraputic Camphor Rub For The Dolors and Aches of Thy Twilight Years."

Urban Meyer's BURN. One quart pure kerosene. Apply to target. Light match. Delight in the aroma. And the screaming.

Hawkeyes: A Scent for Iowans. Based on the rich, challenging scent of Chloroform, Hawkeyes is to be worn on the wrist only, and not inhale by the wearer themselves. An invisible but powerful undercurrent of GHB ensures a night to remember....mostly.

Cool Plodder, by Jim Tressel: Just repackaged unlicensed knock-off Old Spice with undertones of formaldehyde from bargain-basement, unregulated Asian chemical plants. It worked for Woody Hayes, though, whose glance could knock the knickers off a broad at fifty paces.

Dennis Erickson's Lonely Sailor. Bathtub gin, cigar, Turtle Wax...it's all there, everything you expect from original Lonely Sailor himself. With top notes of volcanic ash that suggest an unforgettable adventure, no matter how you try.