Bowling Green recently fired Gregg Brandon and, as of this morning, still seems ready to hire Dave Clawson. That Dave Clawson. Yes, the one behind the Clawfense that helped scuttle the girthy ship Fulmer at Tennessee, the one whose quarterbacks couldn't pick an open receiver out if they were waving road flares in one hand, the very same guy gets to take a 115th ranked offense at Tennessee and turn it into a head coaching job?

This belief in a guy who had a disastrous year this season stems from a belief in the following equation: Two-time D-1AA coach of the year minus this: 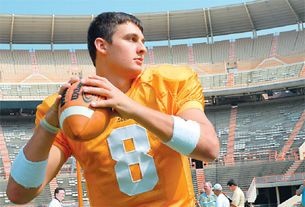 ...equals respectable football coach. The math probably will hold up, but the transition is a bit jarring nonetheless.

In other news, Army fired Stan Brock after back-to-back 3-9 seasons. Bobby Ross says he's interested in replacing him, then he's not, then he is, then he falls asleep on the table and takes a well-deserved nap. The Baltimore Sun's pithy endline on the article is awesome: "Brock had no prior Division 1 coaching experience."