COMMENCE NEXT ROUND OF COACH-SWAPPING

Share All sharing options for: COMMENCE NEXT ROUND OF COACH-SWAPPING

Skip Holtz (spelling correct; no lisp) is not going to be the next coach at Syracuse according to ESPN, a "source close to the situation" told Joe Schad, a man so blessed with "sources close to the situation" it's not unreasonable to propose his status as a shape shifter capable of looking like any AD's secretary at the snap of fingers. If you are ever at an ESPN party, beware, as that pretty lady you're macking on MAY BE JOE SCHAD. 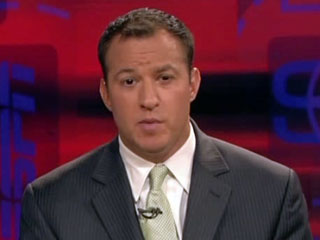 Joe Schad comes in a thousand forms. All of them can type 120 words a minute and are familiar with Microsoft Excel.

If Holtz is not a candidate at Syracuse, then Turner Gill remains on their list. Gill already coaches in the Northeast and is familiar with the territory and the job at hand (rebuilding a near-dead program.) Gill is also on Auburn's list, a job where you aren't sure who can fire you, who you answer to, or how many times you can lose to Alabama before you are shown the door unceremoniously. Um, we mean retire.

The possibility of Gill being the lead candidate there now presents a number of appalling conditions for Auburn. One, they might not get Gill even if they extended him an offer, and two, that Syracuse might get the jump on Auburn in a coaching search, a race lost for the school comparable to losing a race for the last donut with a 450 pound asthmatic in a Lark. (Yes, those things are fast, but the only thing that moves quickly with a 450 pound person on it is an airplane with them inside it crashing to the ground.)