Share All sharing options for: AUBURN TALKING TO TODD GRAHAM

Todd Graham is in the running for the Auburn head coaching spot. Todd Graham, current coach at Tulsa, is the same guy who negotiated in the bathroom on his cell phone with Tulsa while simultaneously hashing out the details of a contract extension with Rice. Graham signed that extension and then immediately bolted to Tulsa. Graham, for our purposes, wears a label in our head that reads "Sierra Petrino Mist Lite." 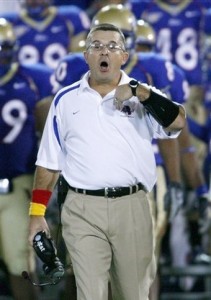 Did I come here with anyone? That football team? No, we're just friends. I can leave with you as soon as I settle up my bar tab.

If Graham and Patrick Nix are in the discussion, several things have become clear. One, Turner Gill stands a much better chance of going to Syracuse than coming down to Auburn, meaning someone at Auburn--or someones, given the Polyphonic Spree engaged in the coaching search--is floating these names to keep the public thinking something, anything is going on in a semi-orderly fashion.

Two, it means Leach is dead and out of the conversation, especially with Graham Harrell reversing and saying it's likely the coach will stay at Texas Tech. Miracles could occur: Alabama spent the better part of a month digging after Nick Saban, an exercise in extreme discomfort eventually yielding to one of the flashier and more effective hires in recent SEC memory. Saban was a longshot who came through, but there's no obvious candidate in the pool right now for Auburn of a comparable profile.

This sounds like doom and gloom and for the most part, it should be. Auburn fired/had their coach resign/whatever at the worst possible moment, a bit of timing we can't ascribe to some long-held grudge on Tuberville's part as much as we'd like to. (The fiction of that scenario, though, is delicious stuff, indeed.) If Todd Graham's tap-dancing in living room for the job, it's tree-shredder-swan-dive time for you, Auburn fan. (Current address: 666 Bonesear Lane, Football Hell.)