Share All sharing options for: CHRIS RAINEY IS EXACT

Florida will take the month plus between now and the BCS title game to heal up, something the Gators desperately need to do considering both injuries brought into the SEC Championship game and a few they picked up in the Korean street riot of the game itself. Kestahn Moore sprained his knee, Percy Harvin's Ferrari legs are up on blocks for the moment (though he may run as soon as later this week) and Chris Rainey has a groin problem. (Overuse.)

Even at the college level we are talking about precise athletes with a deep understanding of their own bodies and their strengths. Rainey, for example, has a very precise understanding of his own pain, according to the Gainesville Sun.

Hes received cortisone shots before each game to take some of the pain away, but Rainey said that it only cures about 93 percent of the pain.

That seven percent is a motherfucker, though it's nice to know his body post-cortisone shot only charges him a sales tax-comparable pain fee for injury. 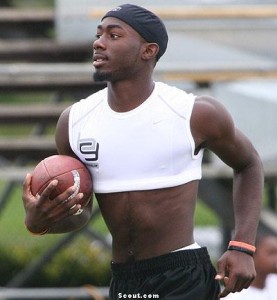 Chris Rainey, seen here wearing exactly 53 percent of a shirt, should be at least 92 percent for the bowl game.