Programming note: Swindle is flitting about the Metro ATL area like an overly excited, be-fauxhawked schoolgirl and I'm typing through a haze that makes me wish Prohibition had never been repealed. Here is some highly subjective and illogical soothsaying. Game thread up a little later. Go cure cancer.

HOLLY, FOR NO REAL REASON OTHER THAN LOLZ: The Wannstache is a master of his craft. His craft is finding ways to lose juuuust enough games for no reason to make us all ignore him, then start winning just to piss us off. Pitt finds itself somehow sitting pretty at 8-3, and none of you had any idea, did you? Be that as it may, this is still the team that lost to Bowling Green. Oooh, and Rutgers (and yes, we are very sorry we weren't around for Mike Teel's one-man show last night). McCoy runs thisaway, Brown runs thataway, and this one'll come down to whoever can kill enough of the clock in Q4. Huskies for the upset.

HOLLY, INDIFFERENT (BUT PATRIOTIC, YOU BETCHA): Both teams can run. Both teams can also defend the run with relative ease. Neither one has had to pass, or had much success when trying all season. Navy's on a five-game streak against Army, but for the first time in a very long while the Black Knights (someone important please name our actual Army the Black Knights, all of it) ain't that bad. Navy, by force of habit.

HOLLY, READY TO JETTISON THIS ENTIRE G-DAMN CONFERENCE INTO THE OCEAN FOR WHICH IT IS NAMED: We were tossing around the idea of taking a field trip to the ACCCG, purely because we were betting on getting prime seats somewhere in the $4.50 range and being able to drink ourselves stupid on television. You know what? This game isn't even worth watching for the novelty factor. Pass.

HOLLY, ONLY HALF-JOKINGLY APOLOGETIC: Look, we pick ten games and there's not a whole lot in the way of choice this week. Would you rather read about Western Kentucky-Florida International's impending barnburner? Me too, actually. Oh, and UW has this one chance to avoid going winless on the year, and it's not a very good chance, because they are terrible. Fin.

HOLLY, CAREFREELY MIXING METAPHORS: Palmam qui meruit ferat, lawyas. This'll be fun. USC's taking their home jerseys to the Rose Bowl, shrugging off the two timeout penalty like it's nothing, but in their defense, that's only because it is nothing. They will roll; they will roll large; Bruins Nation will lose their collective shit, again, and we will snicker at their righteous indignation for hours while sipping a variety of delicious cocktails. Yes, the football monopoly in Los Angeles is over, Bruins. It's really more of a theocracy these days, and your graven idol is cardinal and gold. 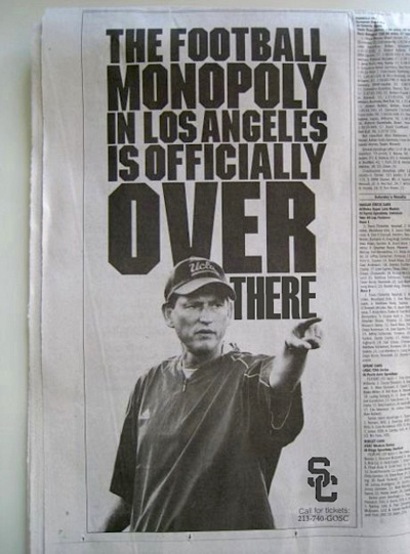 It is to laugh!

HOLLY, HOOKING 'EM: Mizzou. Please? I mean, we've seen this number once before this year, right? Scary-ass Big XII South team stumbles badly against a slightly less well-regarded opponent? They can stop the run, can Mizzou, and Sam Bradford guarding torn ligaments in his spare hand might scorch the earth just a little bit less than he would at full strength (that's assuming he can even hang onto the snaps this week). Chase, buddy, you pull this one out and they'll be carrying you through the streets of Kansas City on a P'Zone-encrusted pillow. Doesn't that sound like fun?

HOLLY, GRASPING AT MAYBE THE ONLY REMAINING STRAW WE HAVE: [to be read in your best In A World Guy voice] In a season of madness....in a time of change....only one man....only one law.....stands between the forces of logic....and the destruction of all. we. know. MIKE STOOPS. LOSES FOOTBALL GAMES. Rated PG-13. Starts Saturday in selected desert stadia.

HOLLY, IN NO WAY PLOTTING A MORGANTOWN COUP FOR THE SOLE PURPOSE OF FIRING BILL STEWART, THEN PEACEFULLY SURRENDERING TO THE AUTHORITIES WITH THE SATISFACTION OF A JOB WELL DONE: Any AFC loyalists in the house? Got, say, a New England fan in your life who continually crows about how terrible the conditions are at Gillette and how that somehow makes his team superior because geography dictates they occasionally play in snow? I hate that shit. Tomorrow, though? It's going to be 20ish degrees at kickoff in Morgantown, and that's an edge West Virginia will desperately cling to if they know what's good for them, because if there's one thing Bill Stewart could fuck up better than everything else he's fucked up this year (WHICH IS SAYING SOMETHING), it's Pat White's curtain call. Things work out best for the Mountaineers lately with White operating as shadow-coach, so just enjoy your Ovaltine, Stewie, and let darling Pitty-Pat's little legs power you through to an eight-win season that should've been at least eleven. YOU FUCKING USELESS CRETIN BOBBLEHEAD REBOUND BITCH. [deep, calming breaths] 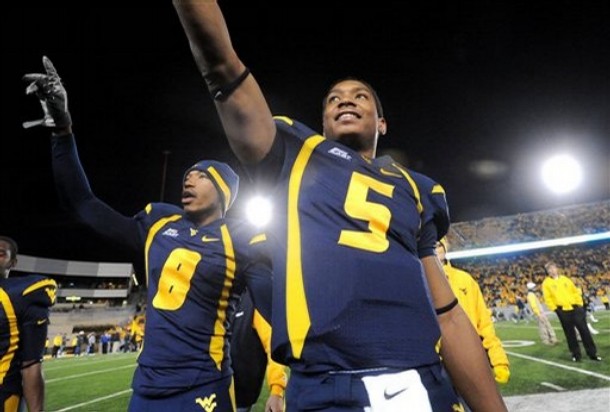 HOLLY, CHEERING FOR ORANGE BEAR/CAT HYBRIDS OUT OF REFLEX:
We're fairly baffled, still, as to why this game is even on the schedule, but TOP SCORE to whoever's responsible on the Cincy end for getting those poor kids out of Ohio in December (and down to Florida in January, come to that). Also, they will trounce Hawaii, and it will not matter, even to Hawaii, who has already accepted an invitation to the Hawaii Bowl Hawaii Hawaii. Hawaii.

HOLLY, PRETTY RATIONAL CONSIDERING THE CIRCUMSTANCES: So here come the only worthy contenders, nearly unbloodied after a season in bat country, to face their first and only real test of the year. I'm taking the Gators. They haven't blinked or flinched since that unfortunate Giggitying in September, haven't been caught sleepwalking once, which is more than I can say for the Tide even though they're the undefeated squad. Nothing save that one Ole Miss game has been remotely close, all year. In their eleven victories, they've outscored their opponents by an AVERAGE of thirty-seven (37) points. And while the competition hasn't been the stiffest, what should scare Tide faithful is how much time Florida's had to workshop this machine all year. When you're up five scores it leaves plenty of spare minutes on the clock to tweak, experiment, and hone your freakshow war engine to whiplash perfection.

(All the same, I'm still cheering for the meteor. Which ain't all that farfetched, since the last time Swindle was in the Georgia Dome, this happened.)