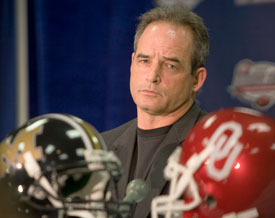 Reporter: "Any further questions: what do you expect to see from the Sooners in terms of game management and strategy on Saturday?"

Pinkel: "I'm gonna just be frank with you. I expect them to put sixty points worth of ungreased football schlong right into our outflow pipe, frankly. Take that down: I expect them to sodomize us with an excellence unseen since Halston took on three members of the French Men's Rugby Squad in 1980 in the VIP at Club 54. We're going to be rammed from the aftside by a battleship that, frankly, will likely split our humble clipper ship in two. We're Edward Norton in the shower in American History X, and we know what's coming. It doesn't mean we like it, but in life, sometimes you're the plunger, and sometimes you're the toilet begging for a mercy flush.

So, in return what I expect is a quality reacharound. Not a half-assed flubbing of the old Atari Boystick, no, what I want in return for taking the biggest Barbary Pirate Handshake since Joel Klatt watched his brain fly out of his nose is a quality courtesy butter-churning from the man in return. Let us get some points back in the third and fourth. Make sure Chase has at least one eyeball when the game is over. Take out Demarco Murray when they're up by thirty. The little things.

If you're going to flesh-kebab someone, you might as well give the courtesy of rubbing their meat before applying the heat. That's all I'm saying, and you can quote me on that. We're not looking for a pastor's handshake here. I want my team to feel the concerned but firm grip of a closeted plumber on holiday in a Miami bathhouse, dammit. It's the least they can do after what will probably happen to us on Saturday.

Any other questions? What? Why are you looking at me like that?

[/the sound of flashbulbs, furious scribbling, and phones being dialed.]