DISAPPOINTMENT HAS A FLAVOR: TWO

Share All sharing options for: DISAPPOINTMENT HAS A FLAVOR: TWO

Disappointment has five flavors in 2008. Numbers five, four and three may be examined, too, if you aren't sad and disappointed enough.

Clemson/Your Potential as Noted in Your Permanent Record. So, your teacher and your mother and your guidance counselor are all seated around the table, and there are these scores: aptitude scores, forty times, profiles, names, James Davis and C.J. Spiller and Cullen Harper and Da'Quan Bowers...and we're all just wondering, kid: where did we go wrong? 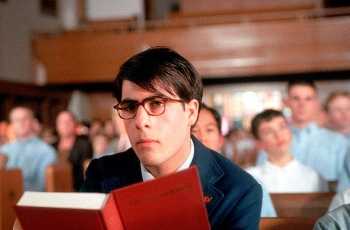 You had so many activities on your resume, Clemson. There were things expected of you.

Ninth preseason. The pick out of the ACC. There were...expectations. You had an appointment with greatness, according to this paperwork in front of us. You had been building for so long for this moment, studying, doing little trial bowls like the Peach Bowl, learning to win...you just looked like, you know, an optimist's dream, a team that would suddenly take the--pffffiiiip!-liftoff into orbit. You attended that smart camp for smart kids at Duke that one summer. You did a diorama that had the middle school faculty goggling, kid. Just add some study skills and an offensive line, and we were all convinced that it would start working out for you.

But then freshman Jamie Harper got the first carry of the season in the Georgia Dome, and fumbled, and...that kind of embodied the whole season, didn't it? A preseason promise gone pear-shaped and leading to just another step in a blowout by a team that didn't spend the entire preseason fantasizing about future glory and the tastycakes that follow hard work?

First you failed the Alabama exam due to underestimating the material and lacking an offensive line. You lay down against Alabama and any team with a decent rushing attack (see Alabama,) and failed to hold onto leads (see Maryland, where you were up 17-6 before coughing the game up to the bizarro Terps.) At no point could we trace any consistency outside of the defense, who unlike the offense seemed to both know what they were doing most of the time and how to do it. Aside from the Alabama game, they showed up every week.

And then you forgot the worst thing of all in the panic induced by deflating expectations: what you were good at in the first place. James Davis and C.J. Spiller were what you were good at, a bruising back and a blazing game-breaker capable of keeping you in games. They got fewer and fewer carries as Clemson morphed from being a run first play-action pass team to dinking the ball all over the place ineffectively like...like Toledo 2003, actually, where offensive coordinator Rod Spence came from in the first place, and where he could be coaching next, for all we know.

He and Tommy Bowden are both gone. Dabo Swinney, the interim coach, has joined Mike Singletary in this year's audition to be the most outlandish stand-in until the real coach gets hired, calling trick plays, introducing new traditions he has decided will be traditions, and attempting to take complete ownership of an essentially foreclosed house. Going 3-2 may back up your claim of squatters' rights, or it may not--we have a feeling that after a decade plus of B student performance, Clemson may just bid him farewell and hire someone with no association with the old regime.

But that's what hurts the most, Clemson. We've invested so much time and energy in you. Superb recruiting classes, endlessly positive preseason ink, the late season swings where you looked poised to jump off the plateau and up to the mountaintop of excellence, of an ACC title, and--we dared dream this at one point--a BCS slot. We bought the Baby Einstein, the encyclopedias, the violin lessons, the window dressings we hoped you would build a stately and prestigious house around. We thought you were just taking your time on the way up, was all.

Turns out you were happy with being a B plus student, Clemson. No, please. Let us finish. We're not even angry. We're just disappointed, and that...that may be the worst thing of all.