Welcome to our Factor Five Five Factor Preview of Miami at Georgia Tech A game where a Georgia Tech team beset by injury faces a young and talented Miami team rounding into form at just the right team. Tech would stand no chance in this game save for two factors:

a.) This is the ACC.
b.) The low tonight will be 31 degrees, and Miami dudes don't like that shit. 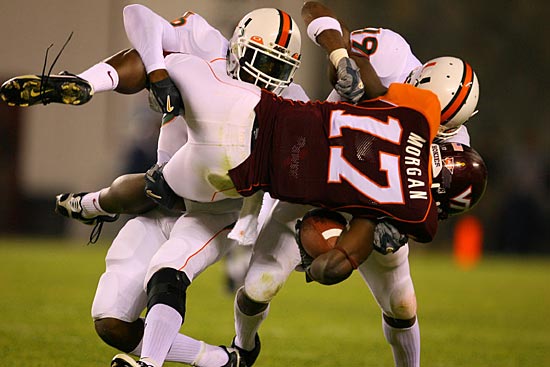 The cold is just making us meaner, asshole.

Oh, and the five factors, which really decide who's going to win this game, after all.

Category one: Nebulous Statistical Comparisons of Dubious Validity. 28.4 points a game, a shocking average for Miami, who we assumed scored points on the Tuberville scale of safeties, coupons, and 54 yard field goals at the gun to end games. For all the bitching about Robert Marve and Patrick Nix's playcalling, they are third in the ACC in scoring. Whether that's a triumph of talent over design is a question for the post-season (YES YES THEY COULD BE SCORING NINETYBILLION POINTS WITH SOMEONE ELSE)--what?

The Nebulous State of Dubious Statistical Validity for Tech: 40, or the number of missed assignments for the Tech offense according to the coaching staff. In a system as simple as the Nerdbone, precision counts twice as much as in other systems, and Tech probably won't be that disjointed against the Hurricanes.

Category Two: Mascot: We went to the Duke/Tech game a few weeks ago.

We sat on the edge of endzone, where the brick wall fronting the western stands rises to about six or seven feet off the ground. A kid waved at Buzz, and his extremely attractive mother beckoned Buzz to come over and say hello.

Buzz trotted back about twenty feet. He made a "parting the seas" gesture, and we got the fuck out of the way lickety-split. Buzz then took a full sprint, jumped, and while wearing slippery white cotton gloves executed a perfect parkour leap onto the wall, and then up it. 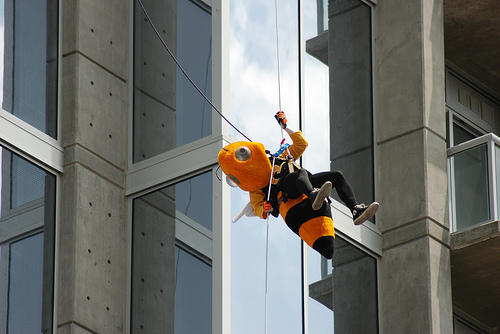 Is this unusual? Nah.

Any mascot that does urban gymnastics with ease and who has parachuted from a plane in the service of the student body earns our vote by a wide margin.

Category Three: Aura. The Canes aren't quite invincible booty-shaking thug-god...yet. They could be soon, but this team still has moments of befuddling inconsistency, especially on the side of the ball where they don't get to just sit back and assault people with impunity. (They're very, very good at that: 10th in the nation, actually.) The foretold Randy Shannon renaissance? Occurring, and that has aura leaning Miami.

Meanwhile, Tech will have a flyover from the space shuttle tonight with three Tech grads aboard: points to Tech. They are also trying a whiteout: points deducted. Most everyone hates the whiteout: points awarded. This?

I was telling one of my friends that if we wanted to do something original, we should have a geekout and have a football game at the library, Pritchett said, because thats where everyone is, anyway. Itd be a guaranteed sellout.

Category Four: Names. For a team once boasting the immortal "Ethenic Sands" on its roster, Miami's a pretty bland slate of football monikers, even with noir detective and heartbroken romantic "Harland Gunn" on the offensive line.

Georgia Tech, though, brings the FIYAH:

Grudges? Scores to settle? Sheer cussedness? Georgia Tech's actually won the last three in a row versus Miami. If you need any further complication of the muddle that was Chan Gailey, there you go: lose to Duke, beat Miami three years in a row.

EDSBS FACTOR FIVE FIVE FACTOR PREVIEW SUM: 3-2, Miami You've Been Factor'd! Reminder: THIS MEANS BET ON THE OTHER TEAM, which because we're writing about the counter-counter-counter-counter intuitive ACC, you should probably decide with your favorite game of choice, like Russian Roulette or Cambodian Land Mine Soccer.