IF YOU BELIEVE YOU WILL LATERAL THAT BALL

Share All sharing options for: IF YOU BELIEVE YOU WILL LATERAL THAT BALL

DION LECORN twists his heels into the turf and waits for the kickoff. The South Carolina Gamecocks are down 14-0 early to the Florida Gators. A clean WHUMP of foot meeting ball echoes through the air. LECORN tracks it through the air.

[A sudden thunderclap sounds. Lightning shoots in a webbing of heavenly fire above him.]

COTG: DION LECORN HEAR MY VOICE AND KNOW THAT I AM THE LORD.

COTG: DAMN RIGHT. MIND THE NAME, THOUGH. I GET SMITE-Y WHEN PEOPLE THROW IT AROUND.

Lecorn: Got it. Hey, why's everyone stopped?

COTG: UNTIL YOUR TIME OF TRIAL IS OVER TIME SHALL BE FROZEN AND MOVED AS I LIKE.

Lecorn: What about Coach? He's still moving over there and talking into his headset.

COTG: WE'VE MET. HE KNOWS THE DRILL AND HAS SEEN THIS BEFORE. STEVE, HELLO. REMEMBER THE FIESTA BOWL? 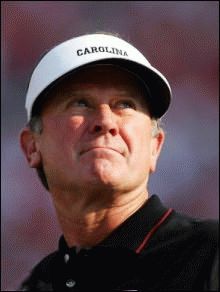 Spurrier: Yep, yep. You got me there, yup, you did.

COTG: WE'VE HAD SUCH TIMES TOGETHER! ANYWAY, I HAVE A TEST OF FAITH FOR YOU, DION LECORN. YOU WILL LATERAL THIS BALL TO THE OTHER RETURNER. I COMMAND YOU. IF YOU BELIEVE, YOU WILL THROW THE BALL. HAVE FAITH.

Lecorn: Will he know if it's coming? 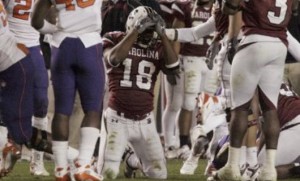 Lecorn: What was that supposed to prove?

COTG: THAT I AM AWESOME AND YOUR FAITH IS STRONG. ALSO, IT WAS VERY, VERY FUNNY. WE'RE ALL DYING UP HERE. THANK YOU. THAT WAS AS FUNNY AS THAT HUGH GRANT FARK THAT WENT AROUND LAST WEEK. GOOD BYE FAITHFUL SERVANT. STAY STREET.