A COMEBACK THAT WAS NOT A COMEBACK

Share All sharing options for: A COMEBACK THAT WAS NOT A COMEBACK 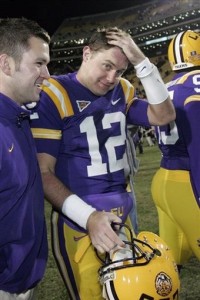 That said: if you have any illusions that the SEC is in a down cycle from stem to stern, here is further proof. Troy Had LSU down 31-10 going into the fourth quarter, a fourth quarter where LSU had to pull off the mathematically improbable feat of scoring 30 points in 15 minutes to win. Feat accomplished, but not before 45 minutes of football that had LSU fans dropping oaths like "Curly Hallman," "Gerry Dinardo," and "Mike Goddamn Archer."

Add in Georgia's struggles against the blip-bloop-ERROR UNIVAC offense of Auburn--the one run at random by feeding punch cards into a 1954 computer located in the bowels of Jordan-Hare Stadium--and the continued mediocrity of South Carolina, Arkansas's year one transition hiccups with Arkansas...it all accrues into the somewhat heretical notion that the SEC is weak this year as a conference.

LSU makes the most baffling case, one likely attributable to HR issues in Baton Rouge. HR questions the decision to not bring in one defensive coordinator to rule them all, instead splitting the responsibilities between Doug Mallory and Bradley Dale Peveto. Sometimes this works--MattiStrong at Florida won a national title this way--and sometimes it doesn't. By the numbers, they're not bad, but filter for results against D-1 teams with a winning record things go pear-shaped: 40.2 points per game allowed, with twin fifty point tallies for Georgia and Florida.

Combine that with Jarrett Lee's ability to score for both teams with equanimity, and the ESPN Insider blue ribbon preview of the Tigers proves to be surprisingly accurate if read in the negative on the "If":

The foundation is strong, especially on both lines, and the talent at the skill positions is impressive. If the Tigers find and develop the right quarterbacks and cornerbacks, they'll be hard to beat once again this season.

If is a dangerous and powerful word. It's further proof, too, that the snarling SEC of 2007 that went 7-2 in bowl games is short a few thousand megawatts of power this year. Let's not get into the inanity of trying to compare conference (he says, sipping sherry from a glass and pondering the daylilies,) but admit this much: it's down in terms of overall performance in-conference, and that is as undeniable and clear as the look of bemused and shamed relief on Jarrett Lee's face in that photo.