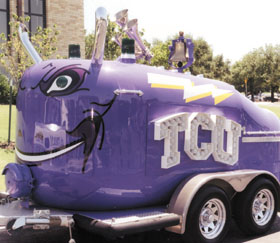 We're not sure if the Froghorn comes on the road with TCU, but it should, because it is an trailer with a huge airhorn anthropomorphized with the face of a giant horned frog, and if that ain't awesome the word just don't exist, son.

We are sure that we'll be liveblogging the TCU/Utah game tonight, and that it will be awesome. See you at 8 hyah. In the meantime, maybe you could watch some film, or read a book, since they're really, really similar according to Les Miles.