MARK DANTONIO JUST CLIMBED FROM HIS COCOON INTO IDIOT STATUS

Share All sharing options for: MARK DANTONIO JUST CLIMBED FROM HIS COCOON INTO IDIOT STATUS

There's a finite amount of things to care about in this world. For instance, we gave up on our hair a long time ago; not only are we losing it, but it has never taken any defined shape whatsoever, and even at its most glorious it never really rose above "slickened by the oily floor of a bus station nap-spot" sheen of a homeless guy. Even when its clean and well-groomed, it's not.

It's good that we weren't blessed with an ounce of athletic talent, since in theory we could have gone to Michigan State, where Mark Dantonio requires his players to wear the least necessary and most phallic of fashion accessories, the necktie. Nothing substantial there, really: it's his business whether he wants to be an iron-rectum'd control freak or not, even if it does seem a little mock-Pattonish for our tastes.

Our greatest Americans, though, have always worn ties: 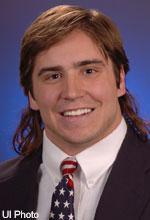 When it really crosses the rubicon into the Kingdom of plug-assed stupid is hyah:

Why did left guard Mike Bacon start Saturday over Joel Foreman against Wisconsin?

Ties are required accessories for every player on Saturdays to complement suits worn during the team's traditional pregame walk from its on-campus hotel to Spartan Stadium.

"That speaks to the discipline of the program," Dantonio said. "He didn't have a tie on so he didn't start. That hurts our football team, but that's the way it's going to be."

Okay, the only official fucking idiot in the history of this blog was and is Dennis Franchione...but you're on the watch list, Mark Dantonio, starting now. When you bench Javon Ringer for eating his peas with a spoon next week, you will blossom into full moronhood.