COACHES WHO COULD ACTUALLY BE PRESIDENT.

Share All sharing options for: COACHES WHO COULD ACTUALLY BE PRESIDENT.

The order of succession for the Presidency is simple. First, the Vice President takes the reins; then, should something happen to them, the Speaker of the House takes over, followed by the President of the Senate pro tempore, then the Cryptkeeper, then the Knights Templar draw numbers...

If you go down far enough, it is a constitutional fact that the 78th person in line for the presidency is the reigning coach of the BCS Champions. Trust us. you don't need to look this up. It is true, not only because it is on the internet, but because we want it to be true.

This would be Les Miles at the moment, who if you like free-wheeling leaders unafraid of faking invasions of Iran and turning east towards Pakistan for a decisive, game-changing score. Unfortunately, we think Miles would make a poor President: he says interesting things, has a tendency to make rash decisions, and is probably too honest for his own good. Also, because he wears a huge, luminescently white hat, he offers up too large a target for potential assassins.

In the interest of national security, we offer up the following four coaches who could actually be president.

Ohio has a history of producing people who just look Presidential, like Warren G. Harding, an incurious and vain man who made the presidency simply because he looked the part.

Unlike Harding, Tressel can actually run something, and would probably not spend the better part of his term banging his mistress in between naps.

Disadvantages: lacks speed in a crisis, punts on key issues.

The kindly elder statesmen whose ability to remember your name and gladhand with the best of them belies his nut-cutting negotiating skills, Mack would be a president in the LBJ mode, simultaneously writing a complimentary email to Carla Bruni on her stunning evening gown she wore to a state dinner the other night while casually threatening a rogue congressman with killing his pet project if he didn't fall in line on a budget issue.

Hopefully, like LBJ, he would also remove his little Longhorn from his pants in times of crisis and point to it and say things like "DOES HO CHI MINH HAVE THIS?" There's not enough genital display involved in American politics these days.

Nick Saban. Most resembles...Nixon. Solitary, brooding, short, and like Nixon, hangs around drunk and naked and mumbling to himself about "those fucking cocksuckers" in times of crisis. Correction: you suspect he does. A mercurial politician capable of being the consoler of the nation, the steady helmsman in times of crisis, and if needs be, will fly a plane into an alien spaceship like Bill Pullman and blow some alien ass into spare Spam if needs be. Another Nixonian parallel: because this is Alabama, the end will not be pretty.

Advantages: Tactical genius; rarely sleeps; will wear necklace made of Taliban members' ears on national television to get point across.

Disadvantages: The makeup for public appearances takes forever to put on.

Tom O'Brien He's like Mitt Romney, but without the sacred undies. Military service record helps mobilize vets, while complete inability to say anything interesting helps lower attacking angles. Would be an ideal candidate against a fringe candidate who survived the primaries simply because everyone else fucked up, like a raving Mike Gundy or Dan Hawkins in full froth.

Disadvantages: Is 8-5 good enough for America?

Ralph Friedgen. The pitch is easy: he already looks like a clean shaven William Taft. 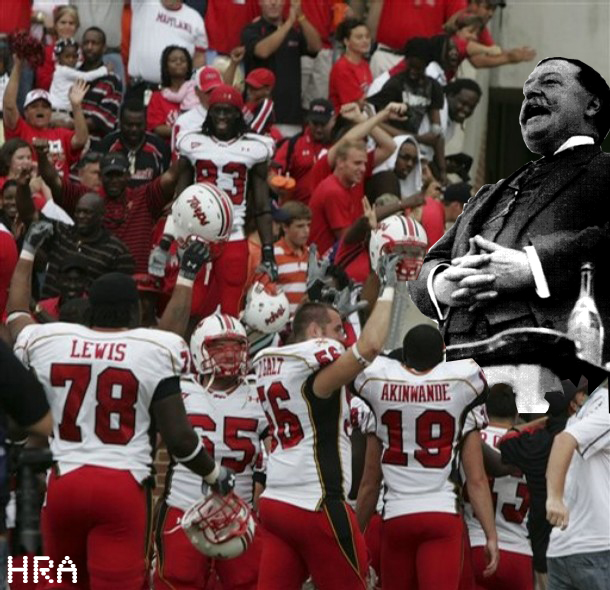 Enjoy election night. We're off to get pikey drunk.