ORSON, QUASI-RATIONAL: It would be intellectual dishonesty to say that these are anything but two perfectly average teams playing perfectly average football: numbers do not lie in either case. Wisconsin in particular has little to say about suddenly changing a game in either direction; they don't pick off passes, they don't change games with special teams, and they can be dick-deficient in the passing game. Michigan State is at home, and therefore will likely win in a game reminding you of everything bad about Big Ten Football (to wit: ACC football, but colder.)
HOLLY, IRRATIONAL: My streak of picking coaches for their perfectly trapezoid-shaped heads ends with you, Bieleieleielma. Spartans.

ORSON, QUASI-RATIONAL. Purdue is one big snowball of suck rolling downhill without their starter Curtis Painter, who is likely out with a separated shoulder. Michigan has been demonstrably awful by both the standards of casual assessment and Brian Cook-bot obsession, but they are not Purdue-bad. Close, but not quite there. Diabeetus 10, Brundlefly Michigan larvae-team 17.
HOLLY, QUASI-RATIONAL IN THE FACE OF BLINDING HATRED: Purdue is so, so bad. This is science. So bad I can't even pick them over Michigan, which is a team losing lots and lots of games and which produced He Who Must Not Be Named, But Who Is Very Fat And Has No Super Bowl Ring. Wolverines, grudgingly.

ORSON, QUASI-RATIONAL: The run doth not trouble the 3-3-5; passing does, and UConn hath not the potential to handle this. Also, our very own favorite football term ever--"gold frontz" speed--comes in reference to Noel Devine, and the term itself emergeth from our preferred Fat White Guy, who writes:
Saying WVU's defense is unique is like saying superman was "gifted." The 3-3-5 is like a mid-season migraine for all offensive coordinators: seven previous weeks of Lombardi-esque basics and all of a sudden someone is rocking the boat.
Unpredictable micro machine migraines FTW.
HOLLY, QUASI-RATIONAL: Not that Connecticut can pass even against non-mutant defenses. WFV FTW, but if this late-season display of competence saves Bill Stewart's job I'ma have some very strong and stabby words for the higher-ups in Morgantown.

ORSON, TOTALLY IRRATIONAL. We've picked against Virginia three games in a row, and yet the Meh-mperor sits with his Cavaliers atop the ACC Coastal division. Having awakened to this fact is a sure sign Groh-mentum ends here, and UVA Cavs RB Cedric Peerman suffers a down game, and that it all goes pear-shaped if we bet on UVA. Therefore, Canes and Robert Marve, the qb with more "he's improving! Really!" stories tacked to him, will prevail even if Marve doesn't play, since Lieutenant Winslow don't lie, motherfucker: Jacory Harris is the balls.
HOLLY, IRRATIONAL BUT NOT WRONG: In which we place our trust, however misguided, in a fledgling but fanged Miami squad over giving Al Groh the opportunity to break our hearts.

If you want more rational than that, you're in denial. Kansas wins for the baby Mangino. 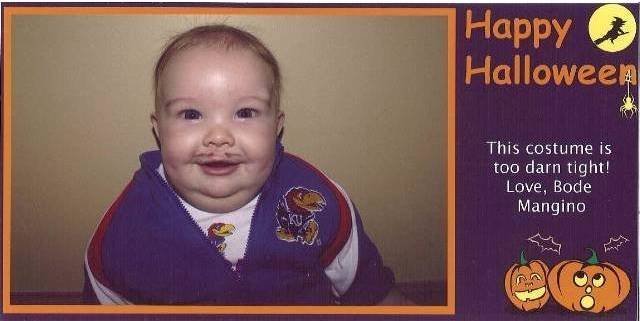 HOLLY, COMPLETELY HORRIFIED AND STRUCK DUMB BY THE ABOVE PHOTO. Kansas. God. Just scroll down so I don't have to look at DEAR GOD WHAT IS THAT THING.

ORSON, QUASI-RATIONAL. A vintage Florida State defense meets a struggling GT offense incapable of topping 24 points. The skies darken over downtown Atlanta; a car crash is heard; a mascot in Chuck Taylors is blown out at home by a vastly improved Seminoles team. Did you know that 1 out of 6 Tech graduates are allegedly millionaires? And will be fans of a losing football team this Saturday, because this is year one of the flexbone and no one's still exactly sure how to manipulate the apparatus to maximum effect yet?
HOLLY, QUASI-RATIONAL: "Fifteenth-ranked Florida State." Say that without shuddering. No, try it. That sensation? That's your skin trying to crawl off your body and skitter away in the wake of the wheel of fortune spinning 'Noleward once more. FSU, rising. Miami, rising. Nebraska, in no way rising LOLZ. It's unnatural as it is unavoidable.

ORSON, QUASI-RATIONAL. South Carolina. With the scrap parts he's working with at South Carolina, Spurrier the White is 1-2 against his former rent-a-whore, Fulmer. Tennessee scored points and a dominant victory against Mississippi State, the football equivalent of the odd can of tuna found in the desert consumed just days before getting even more lost and then dying in the arid wastes. Gamecocks trump them anyway because they can actually score points.
HOLLY, TALK RADIO RATIONAL. I swear to you, the Music City Bowl will piss off Knoxville more than sitting home in January. If we even rate the Music City Bowl. Oh, god. Still: Whatever. We got this.

ORSON, QUASI-RATIONAL. Texas. If Colt McCoy has a bad day, he only completes 70 percent of his passes. This is still seventy percent of his passes. Also, Mike Leach has only beaten Texas twice in his tenure there, Brian Orakpo is the most menacing pass rusher the Red Raiders have faced, and the clock rules now favor Texas--slowing budding a running game now--in a clock situation.
HOLLY, IRRATIONAL WITH VISUAL AIDS: 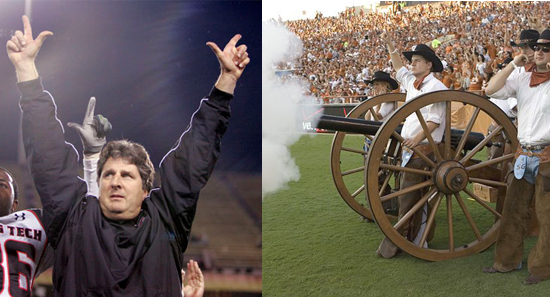 HOLLY, RATIONAL AND SCARED:
Florida, unreservedly. Oh, they're fast. Oh, they are so fast and I don't know where they found their real football team but I'm just glad it's not us. I have advance survivor's guilt and it's not even my team rolling into Jacksonville to die. So. Fast. 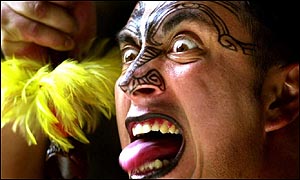 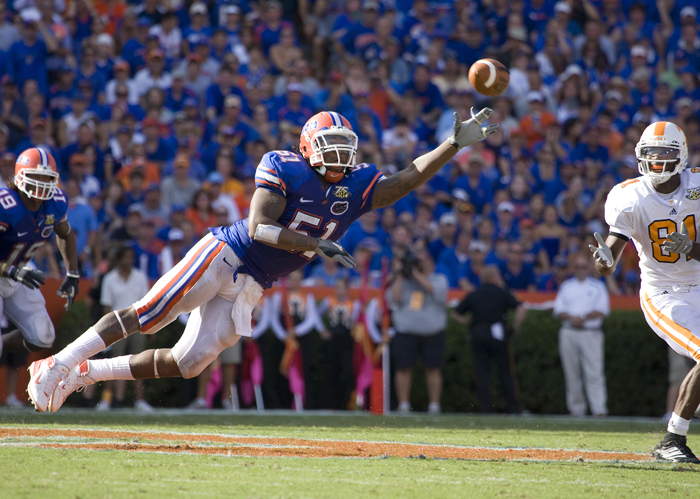 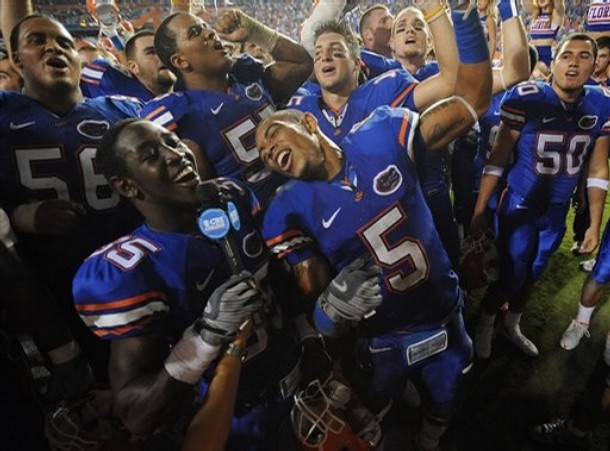