We sat down for an interview with Mark Richt. Or maybe we didn't. Anyway, there's little point in doing it for the purposes of a hit piece, because he's a terrible target, as the following script suggests, unlike targeting many of the fatuous ignoramuses who root for Georgia, which is like shooting a cow stuffed into a barrel.

Orson: Thanks for joining me, Coach Richt. Not that I'm happy about it.

Mark Richt: No problem. I'm happy either way. Excuse me, I have to put away these photos of my trip visiting troops in Afghanistan this offseason. Such inspiring bravery and commitment, you know? 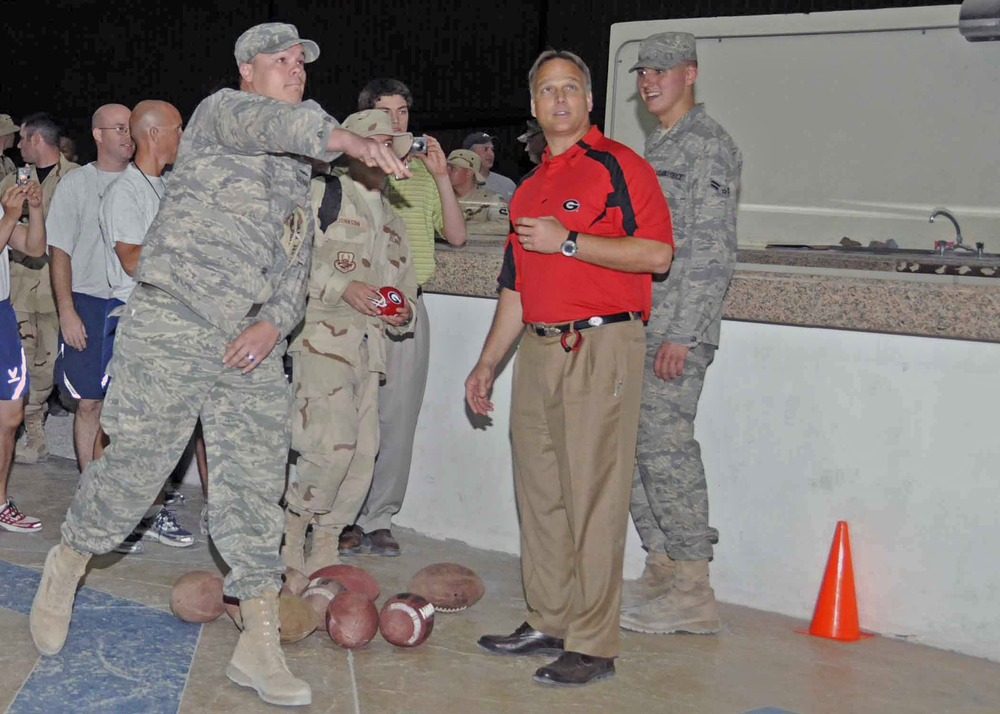 Orson: No problem. First, Coach Richt: what's it like to suck so much?

Mark Richt: That's funny, Orson. I'm actually 79-20 as a head coach, have two SEC titles, and was a successful coordinator at Florida State. I don't know if suck is the right word.

But enough about your "record." What about your support of domestic terrorism in the form of offering a scholarship to a player named MOHAMMED, huh?

Mark Richt: If you mean Mo Massaquoi, he's a fine young man, and not a survivor of the horrors of the Liberian civil war. He is, however, the child of Liberian parents. I'm tolerant of all faiths, as is our program.

Orson: Whatever, Coachsama. What about your profoundly annoying religious faith you tout in recruiting and shove down people's throats at any and all opportunities, huh?

Mark Richt: I think you're talking about Tommy Bowden.

Mark Richt: We did adopt two Ukrainian orphans, and consider ourselves blessed to have them.

Orson: Whatever. Like you're adopting the difficult ones. I bet these were the ones with third kidneys to sell on the black market WOOO BURRN GO GATORS!

Mark Richt: Actually, one of them has Proteus Syndrome and an indomitable spirit. I'll provide a helpful film if you like:

Orson: More "details and facts." You use the film because you graduate none of your players, and thus have to use slideshows and simple pictographs to communicate with them.

Richt: That was a problem, but I would point out that we're working on that, and I acknowledge that it's a problem. Our 958 APR score is the highest among SEC schools, however. I would like to just point that out.

Orson: Whatever! I SCORE ON A DEEP PASS TO THE BACK OF THE NO-SPINDZONE! GIVE THE MAN SIX!!! Go cry in the arms of your trophy wife, sucka!

Richt: I'm married to the same woman I've always been with, a well-liked cancer survivor who works on the sidelines giving the players Gatorade, and is kind of hot even to a jaded, soulless blogger like you.

Richt: I forgive you.

Really, he's like a PR ninja. You throw knives at him and he disappears in a cloud of smoke.