Share All sharing options for: ALL HAIL THE QUARKBACK! 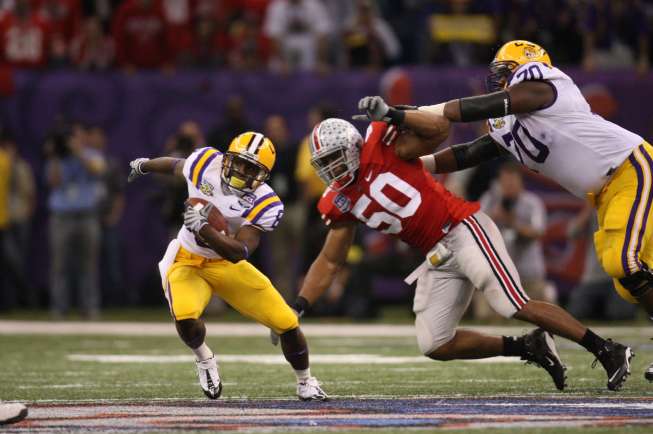 I think the small, fast running back has a place in football, said Les Miles, the L.S.U. coach, whose reigning national champion Tigers were pummeled by Florida, 51-21, on Oct. 11, when Demps rushed for 129 yards, including a 42-yard touchdown. Its probably a role that will expand the way football is going.

Running backs on the whole tend to be snack-sized as far as football players go: a quick survey of the top ten rushers in the nation this year reveals only one, Andre Anderson of Tulane, who is listed at 6'0". (BTW: that is his Fantasy Nobility name: Andre Anderson of Tulane, Ruler of Estates and Sirer of Kings.) Even the "power backs" in the top ten--Donald Brown of UConn and Shonn Greene of Iowa--are at 5'10" and 5"11', respectively.

Thus Miles suggesting there's a role for the smaller back refers to even smaller backs than you might think, the Chris Raineys and Jeff Demps of the world, generously listed in the 5' 5"--5'9", 150-180 pound range. Since the spread offense is going nowhere and neither are they, these gifted gentlemen need a name, a category, and a definition, and we're here to provide it. The new verbiage, codified:

Quarkback (?kwork-bak), n. A running back loosely defined as being 5'9" or less and weighing between 150 and 180 pounds and possessing 4.4 speed or less. Derivation: internet slang.

Example: Jeff Demps, Florida quarkback, ran so fast on his third quarter dash to the endzone he inflicted second-degree burns on SEC official Penn Wagers as he passed him.

Glad we could help. (Andrew wants part ownership, or at least inspirational credit from this entry. Granted in heaps.)