AN ANATOMY OF SADNESS

Share All sharing options for: AN ANATOMY OF SADNESS

Mike Sherman succeeds where even the loathsome Dennis Franchione could not: he has crushed the last bulwark of a despondent fan, hatred, and left Texas A&M fans intent on his firing devoid of all emotion. UP TOP, BRAH!

It is because of the utterly despondent state of affairs with Texas A&M football that Aggies have completely given up on their football team making it poor business for popular sites like ours and the A&M section of the Houston Chronicle to thrive. Therefore, this page will be the last posted by AggieCoach.com and then we are shutting down.

How did he do it? AggieCoach.com led the charge spear-first into Franchione's gullet, proving that while Aggie fans were downtrodden, they were at least an angry, stabby kind of oppressed, ready at a second's notice to revolt and feast upon the well-marbled carcass of Franchione. Yet, faced with the Ineffable Sadness of Mike Sherman, they wilt and evaporate in the cushy, love-handled shadow of his presence.

A quick comparison of faces alone may help to explain the total malaise creeping through the ranks of the 12th Man right now:

Franchione: Contemptibly smug-looking. Liked his ironed polos. Clearly concerned about outer appearances. Dying for direct hit to the face with frying pan. Kept same countenance no matter the record, abysmal though it might be. 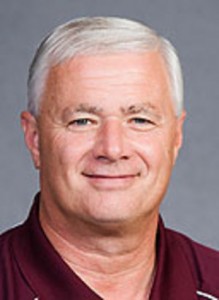 Sherman: Perpetually sad-looking. Rumpled. Wears Bahama shirts in Aggie colors. Could plausibly prefer muu-muus to actual clothes, or least a bathrobe, a pair of voluminous boxers, and a wife-bearter. Appears on the verge of falling asleep most of the time. The remainder of the time, is asleep. 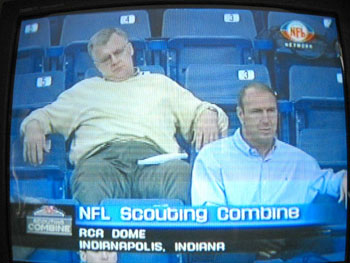 Most importantly, it may be the complete lack of hope that is crushing the very life out of Aggie fans at the moment. At least under Franchione there would be the odd win here and there, the rivalry game upsets over Texas, the flashes of competence that keep getting him hired by one program after another. Mike Sherman's Aggie teams have, thus far, lacked even the glimmers of hope, almost losing to Army before coughing up double digit losses to all three of their conference opponents thus far.

Aggiecoach.com waving the white flag is proof positive that once you've hit rock bottom, it's not a given that things have to get better; in fact, rather than going straight up, you can be dragged along the rocky, barren floor of the sea for years at a time, or even sucked into underground chasm where Mortlek, the King of the Man-eating Undersea Worm-sharks, feasts on your helpless, beaten body for years at a stretch. But enough about Syracuse: for the moment, the story at College Station is further proof that when the hands are shown, a royal flush of despair beats anger any day.