ORSON, COMPLETELY IRRATIONAL. Wake Forest will win because, like Indiana Jones in a fight, they will be punched, kicked, scratched, pushed face-first into something hot, and then the improbably pull victory out at the last second with a field goal, or by a safety, or by Maryland inept'ing there way out of sure victory. Jim Grobe will lose an eye, but his one-eyed visage will be the last thing you see.

HOLLY, ALSO IRRATIONAL BUT WITH CRITTERS. Let's see, shut out last week by Al f'ing Groh...yep, they're due. Maryland, recipient of this week's ACC Roundelay Enjoy It While It Lasts Because It Won't, Last That Is Tiara. FEAR THE TURTLE.

ORSON, QUASI-RATIONAL. Matt Stafford's at 8/3 on the year, but WOOOO SIC 'EM YOU AIN'T WILD YOU MILD: peep that 61.3% completion percentage, a barrier enormous fetus-hating hater-types said Matthew Stafford couldn't broach. Broach this, assfaces, because if you're looking for a handout, der Kegmeister's not in the handout business, and after losing to the 'Dores in Athens two years ago, neither are the 'Dawgs. Apah-ca-leeeeeepse, Bow. (Wow.Wow.)

HOLLY, QUASI-RATIONAL. My SEC East season fantasy since about Week 4 involved Vanderbilt going undefeated until Tennessee came to town and left with what would be the Vols' only conference win. How wrist-slashingly appropriate that would've been. Thanks a fuckin' lot, Croom. Vandy collapses big against the first weapons-grade offense they've faced all year.

Ole Miss @ #2 Alabama
ORSON, QUASI-RATIONAL. HammerFight of the Week: Alabama finally plays a team that can provide them with a mansome challenge on the lines, particularly on the defensive line where Peria Jerry, Greg Hardy, and shaved bear Jerrell Powe may actually make running for the Tide a challenge, thus putting John Parker Wilson into active passing mode, and thus tilting odds toward Ole Miss enough to make this interesting. Prepare crash pads around your couch to prevent injury, as you will fall off it when the Tide pass on first down. Taaaaahhhde, but close. 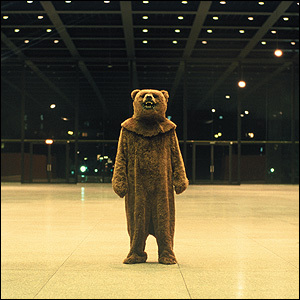 HOLLY, QUASI-RATIONAL. Houston Nutt and his ragtag fleet knocked off Florida, sure, but a Florida team that was very much Not Themselves. I'm afraid Alabama will be quite operational when the Rebs arrive. Crimson Tide, and it won't be pretty.

ORSON, IRRATIONAL. Oklahoma lost last weekend. Kansas has no run game to speak of and will attempt to mimic the surgical dissection of the zone Colt McCoy accomplished last week. This will not work two weeks in a row, because the Sooners are bent on obliteration. Get your disaster on, Kansas, because it's coming whether you like it or not.

HOLLY, QUASI-RATIONAL. Quick, what's scarier than Oklahoma's offense? (No, besides Texas' defense?) A cranky Oklahoma offense still very much in the Big XII title race thanks to the Longhorns' strength of schedule. Our sincere condolences on your impending snackification, Jayhawks.

ORSON, QUASI-RATIONAL BUT PREJUDICIAL. They're essentially the same team, the kind of well-disciplined, defense and field-position-oriented teams that, were they surrounded by festive fans oozing bourbon fumes, we'd celebrate in the SEC. Alas, Pam Ward calls many of your games and you play in the land of overcast suicide skies, so we dub you the Big Ten and mock your sluggish ways. The quasi-rational thing to say would be that in a push of teams, you take what you suspect to be the better defense and the team with the quarterback that could actually make something out of nothing. BUCKEYE!

HOLLY, IRRATIONAL BUT HUMANITARIAN. No matter your particular team or conference affiliation, all right-thinking American patriotic fans of the game should be pulling for the Spartans here. The USC loss was the double-shot to the chest, a mercy kill to spare the Buckeyes and a weary nation the irritation of a third straight title game massacre. They're still hanging a little too close for comfort in the polls, though, so time to put one in the head. (So to speak, Columbus. So to speak.)

ORSON, IRRATIONAL. Ride with the devil when you bet with Wannstedt: coming off an upset of South Florida and a long layoff spells "s-l-a-c-k" like nothing else, especially given the induplicable scrum of the Navy flexbone. Gouge away, Navy, and nix this sudden attack of competence the Wannstache and Pitt have going, thus restoring the universe to its proper axis.

HOLLY, QUASI-RATIONAL. Both teams have one win notched that might maybekinda mean something (Pitt over South Florida, Navy over Wake Forest). But only one of them lost to f'ing Bowling Green. The other has somehow racked up the #2 rushing game in the country. That team is Navy, and Sad Wannstache will be the order of the day.

ORSON, QUASI-RATIONAL. Duke was absolutely muscled around the field by a larval Georgia Tech team made up of players who, though immensely talented, cannot blip around the field one-on-one like the players Miami can put two-deep at every position on the field. The pony trick with Miami is that once you remind them of this, they make unbelievably breathtaking mistakes at every turn. Oh, and Patrick Nix is their offensive coordinator, and thus expert in blunting a team's chances no matter the situation. Duke to cover, but not to win.

HOLLY, IRRATIONAL. With four ranked teams remaining on the schedule and three wins to their name, Duke needs all the help it can get as far as bowl eligibility. Picking them here because the idea of David Cutcliffe taking the Blue Devils to a bowl game while Phil Fulmer sits at home in January is morbidly delightful.

Croomed. Learn the vocabulary of the people and speak their language when you address them. Time. Mar.Ches. ON ON ON ON.

HOLLY, SEC-RATIONAL. Appallingly similar stats aside, I think we survive this one, because Croomings fall to teams that might otherwise matter. It's in the nature of Missy State to throw wrenches where they'll do the most damage, so look for them to upset the Crimson Tide in November instead.

ORSON, QUASI-RATIONAL. Missouri hasn't been exposed, but they'll have a different hole to plug this week: the porous defense not fully exploited by Oklahoma State last week. Colt McCoy carries the first half by keeping up with Chase Daniel's pointsapalooza; the defense carries the second half when Muschamp dials in the adjustments and suffocates Daniel. Sergio Kindle is hungry for ribs, and will be dining on them in the backfield. (Meat supplied by 35 year old pizza delivery man bringing the beef.)

HOLLY, IRRATIONAL BUT WITH A REALLY GOOD POINT. Longhorns, you don't know them very well, I know, but trust me---you don't want to live in a world where Alabama is the top-ranked team in the country. Half of the actual state of Alabama concurs. Don't fuck this up for the rest of us.

ORSON, TOTALLY IRRATIONAL ELL-ESS-YOUUUUU, mostly because Les Miles will start with an onside kick EVEN IF LSU RECEIVES. How this can happen, we don't know, but he'll find a way.

HOLLY, IRRATIONAL. Picking South Carolina to knock off LSU solely because Garcia's slated to start would be just crazy, right? Crazy like an SEC school with a perennially drunken fanbase that employs a live tiger as a mascot!