Share All sharing options for: SLOW NEWS DAY: TAKE THIS TIME TO PURGE.

In lieu of refunding everyone's daily subscription fees for what's turning out to be the first letdown day following the OMG GREATEST FOOBAW WEEKEND EVAR 2K8, we're taking a step back. There's absolutely nothing interesting happening today, so we're focusing inward and using this time to improve ourselves as fans by confessing our greatest cardinal football sins. We surveyed ourselves, fellow bloggers just as strapped for content as we are this afternoon, and a few intrepid commenters. The following is our preliminary list of trespasses against our fellow man, our school loyalty, and in several cases against humanity itself. 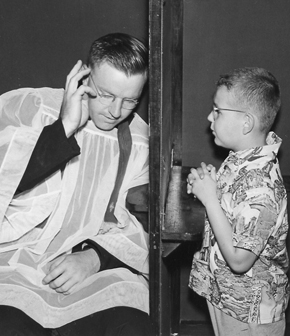 Forgive me father, for I enjoy the sounds of "Rocky Top".

HOLLY, Tennessee: "I think the recitation of Neyland's Maxims is one of the dumber traditions in college football and would like nothing better than to see it scrapped."

PB, Texas: "I don't hate Kirk Herbstreit like I should. It's pitiful. He has some weird charisma that overwhelms my rational mind. Maddening."

SIGNAL TO NOISE, USC: "I've started to hate Mark Sanchez. I was uneasy with it; there was something I couldn't place. I was kind of "well, he's the QB of the team I root for," but when the announcers last week compared him to Vince from Entourage, my hate made sense."

ROCKABYE REGGIE NELSON, Florida: "I prefer games on TV to games in person."

WORSTFAN, Ohio State: "I want Ohio State to lose again, so I can stop trying to rationalize how they still deserve to be in consideration to be "in it". I say this as a holder of two Ohio State degrees and former 5 year resident of the 43210."

BURRITOBROSSHITS, Florida: "Feigning love for the Buckeyes to get laid. Actually worked but I felt really dirty and guilty afterwards. I didn't have the heart to tell her, though, so I just bounced."

MONDAY MORNING PUNTER, Ohio State: "Daryll Clark is the man! He strikes me as the kind of guy that could take a girl out to a nice dinner the one minute and then toss her down a flight of stairs the next."

LT. WINSLOW, Miami: "Fuck it. I don't regret it. I shared a brief, romantic moment with my coke-whore ex girlfriend's best friend inside the privacy of a stall in the women's bathroom in the west endzone of the Orange Bowl at the '06 Miami-FSU game. There were little teardrop shaped titties and a baggie of white powder and I'd do it again if I had the chance."

We feel better already. Please, do join the purge party below with your worst transgressions.