That's a question: we've heard from at least three Ole Miss types this morning that just two weeks after making the cover of SI DE Greg Hardy is out at Ole Miss in theatrical fashion.

There were signs--this article and complaints about his effort in general--but on the whole it would still be shocking that someone as talented as a potential first-rounder would let a latent streak of jackass cost him NFL money. 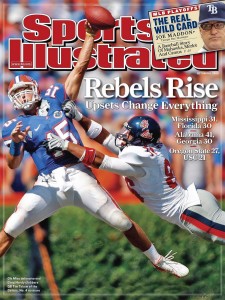 If you actually know something about us, harumphharumph of either the gmail or yahoo variety is ready when you are.

UPDATE: To say that he remains on the team, and other than that there's nothing doing here besides weird rumblings.