#5 Texas vs. #1 Oklahoma
HOLLY, BLATANTLY IRRATIONAL: The Red River Shootout is all about spite, so allow me to oblige: Oklahoma is a barren wasteland whose women look like they were born on the backs of tractors. Texas for the upset, and damn the torpedoes.
ORSON, RATIONAL: Oklahoma will see some oddball defensive formations unseen on film, because that's how Muschamp do, but Bradford will still operate relatively unhindered behind the Loadholt Line, Oklahoma's first greatest asset as a football team and still more evidence that quality beef garnered in recruiting is the first step toward whipping ass in 360 degrees. (The only other team pushing people around on the same level: Alabama, another team with abundant burl on the lines.)

TCU loaded the box on them, and Bradford went ballistic; sit back, and they'll rack up 200 yards passing and 200 yards rushing on you. Brian Orakpo might get pressure off the edge, but otherwise the lack of a consistent running game from Texas outside of Colt McCoy doing his best Tebow '07 imitation keeps Oklahoma firmly in control from the start, leading to the eventual disappointment for Oklahoma of blowing a game (OK State?) late in the schedule to spoil undefeated happiness.

East Carolina @ Virginia
HOLLY, IRRATIONAL: ECU. Try diving into the tangle of ACC relative superiority (Virginia's coming off a loss to Duke, who beat Navy but were shut out by Georgia Tech, and a win over Maryland, who handled Cal easily while barely scraping past ClemsonHEADEXPLODECLICKBOOM) is a futile exercise in migraine formation that can only lead to picking the school with the pirate for a mascot.
ORSON, IRRATIONAL: East Carolina, because Virginia had a really, really good game last week, which by university policy means they get this week off.

South Carolina @ Kentucky
HOLLY, QUASI-RATIONAL: Non-Kentuckians, kindly rack your brains to name a single offensive playmaker on the UK sideline. No? How about a single player, period? Yes, Woodson's gone. Tamme too. See where this is headed? Gamecocks' fledgling win streak rides, even sans EDSBS Mascot Garcia.
ORSON, IRRATIONAL: There's every reason to believe South Carolina should come out and perform well in this game: a reinvigorated Chris Smelley, a defense ranked in the top ten nationally, and relatively little grumbling from Spurrier the White about his team's performance. Kentucky cannot score--barring completely blown coverages--and South Carolina, while bipolar from week to week, has at least a chance of scoring. If defenses are a push, then South Carolina wins in a game whose box score should look like an approximation of last week's Wildcat game against Alabama.

#13 Vanderbilt @ Mississippi State
HOLLY, IRRATIONAL: Vandy rolls, in the way that tire-flippers roll their charges: haltingly and with unseemly exertion. By the way, they're going undefeated until the Vols come to Nashville and walk away with their only conference win of the year. Put down the gilded letter opener; it makes perfect, morbid sense and you know it.
ORSON, RATIONAL: Vandy should avoid extended contact with Mississippi State's offense, as two weeks of prolonged exposure to offense of a virally awful offense like the Bulldogs' could lead to infection. We're prepared to blame the overall downturn of offense in the SEC on patient zero, Croom, whose acquired allergy to offensive production has infected the entire conference. If nausea does take hold, we recommend Prochlorperazine. Vanderbilt in a near replay of the Auburn game, but with different color jerseys on the other side.

Nebraska @ #7 Texas Tech
HOLLY, RATIONAL: Each year since the inception of the Leach administration, we pray fervently for Tech to make a BCS run of it, that we may see Mike Leach on nationally televised interviews as frequently as possible. This is not that year, with a backloaded conference slate that has the Red Raiders facing Texas, Oklahoma State, and Oklahoma back-to-back-to-back in November, but it's the best chance they've had yet, and tomorrow's just another tuneup. TT victorious by scores, and by "scores", read "multiples of twenty".
ORSON, RATIONAL: Mizzou lit them up. Texas Tech will do the same in a manner so XTREME ONLY NU-METAL CAN CAPTURE IT.

Tennessee @ #10 Georgia
ORSON, RATIONAL: It's not just that Blutarsky has a bad feeling about this; it's that Tennessee has Britton Colquitt back. That's like giving Buford Pusser his whompin' stick back; it's like giving Lexington Steele his cock back; it's like saying, "Oh, here Old Boy, take this hammer. I'm sure you won't fight a hallway full of bodyguards with it." The power of Colquitt compels you, because the punter is the centerpiece of any Tennessee offense. Tennessee to cover, but we'll shy away from a win call because we are total and complete pussies.
HOLLY, RATIONAL: Dear Britton: You're late. Every word of doubt from the Georgia faithful is reverse-sandbagging at best, condescending head-pattery at worst. Colquitt and Nick Stephens represent the best hopes for a close one, but unless either of them can, respectively, provide his own punt coverage or pass to himself (or, hell, PLAY MONTARIO HARDESTY AND LENNON CREER FOR THE LOVE OF FRIED DOUGH), it won't be enough. Tennessee two weeks ago = Very bad football team. Tennessee tomorrow = Very bad football team plus human field position apparatus and untested shades of legitimacy at quarterback. The sum of their parts will not save us. Count on: Another maul-y day from an appallingly talented Vol defense, Georgia playmakers soldiering through injuries, and thousands of heavy hearts trudging back to Knoxville after dark.

Notre Dame @ #22 UNC
HOLLY, IRRATIONAL: UNC, if there's a Football Jesus in heaven, because anything that allows pollsters to righteously strike Notre Dame and the dappled palomino named Rosebud Sense of Entitlement they rode in on from the rankings for the remainder of the year is indisputable evidence of the existence of a sovereign and benevolent God.
ORSON, RATIONAL: UNC hits really hard, and likes to take your ball and go the other way with it. Notre Dame likes to throw the ball a lot. Notre Dame football on NBC: TOUCHDOWN, OTHER GUYS. Rinse and repeat for the remainder of the game.

Arkansas @ #20 Auburn
HOLLY, IRRATIONAL: Auburn, but only as long as we're SURE we've explored every possibility that both teams could lose this game and come up empty. Positive?
ORSON, IRRATIONAL: Covering our eyes, but Auburn, who will score rouges, safeties, and touchdowns off blocked kicks until the second half when, properly rewarded, Bobby Petrino crosses the sidelines and seizes the reins of the position of offensive coordinator for Auburn.

#17 Oklahoma State @ #3 Missouri
HOLLY, QUASI-RATIONAL: Is Mizzou's defense complacent or weak? Does it matter? Given the Gatling gun on the other side of the ball, they can be either for the remainder of the season, and the only two weeks it'll matter are coming right up. The catch is, they know that. They'll be ready enough.
ORSON, RATIONAL: Missouri's going to have to sweat this game until the end because Oklahoma State, while swinging doors of compliant courtesy on defense, are monstrous on offense and facing a Missouri defense we still wouldn't bet plug nickels on stopping anyone of consequence. There are flyweight boxing matches where, from the bell, two little Latinos come out swinging and don't stop even after brain matter is flying in visible chunks from their ears. This will look exactly like that.

#4 LSU @ #11 Florida
HOLLY, RATIONAL: If this was a Death Valley game looming, I'd pick LSU. That's how creepy-bachelor-uncle close this is going to get. Gators by a claw, by virtue of Swamp nightgame advantage and the [g-adjective of your choice (gritty, gutty, gutsy, gunslingy)] efforts of the Tebow Child alone.
ORSON, COMPLETELY AND TOTALLY IRRATIONAL: 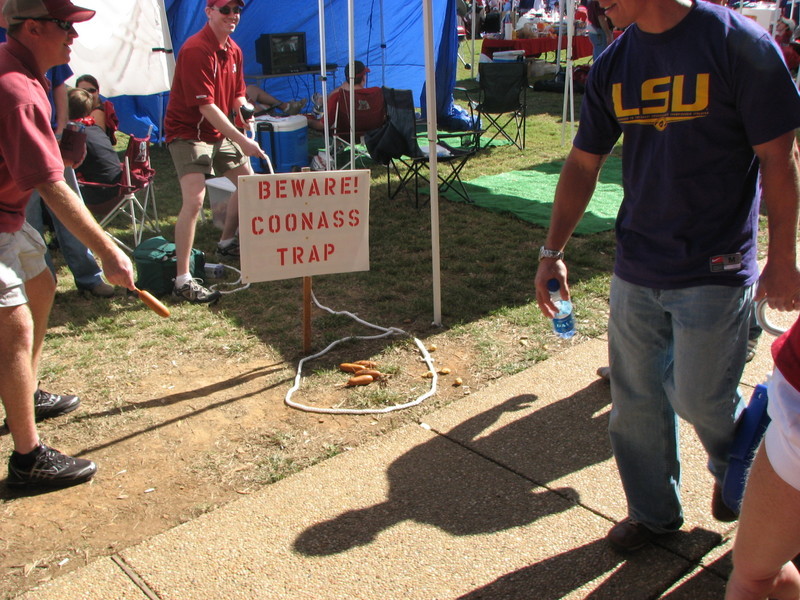 Florida. There's no other reason for us to say this other than the fact that Florida has been dodgy all year despite leading the league in scoring offense and posting the 19th best total defense stats in the nation. At one point, this thing has to go off, and at home at night against LSU is as close to zero hour as you could want. Plus, LSU brings out a certain snaky little punk streak in Tebow, who's been tighter than a test pilot's asshole at 7Gs this entire year.

It's not a blowout. It's not even a comfortable win, mind you: but it's a win over an LSU team that to this point has not been tested as it will be against Florida. Even stuttering as they are, the Florida offense is much, much more of a test than Miss. State, Auburn, and North Texas have presented. The team that makes two mistakes leaves with cold corn dogs and soggy, pee-stained jorts as consolation prizes--not one, but two, because both teams are as error-prone as they are talented.