Ohio State seems to be doing what good teams do after getting their heads kicked in early: regrouping, finding their rhythm, retooling with the extremely un-gay Buckeye Pistol formation. (Fullback! GRRR!!!), and otherwise recovering nicely for a stretch run. 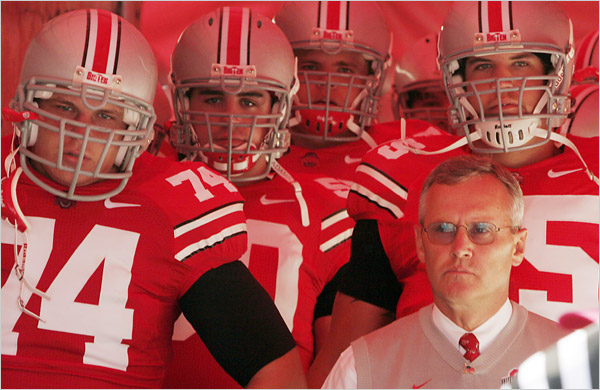 Gosh almighty, that's pungent. Does someone need to dot an 'i' in here?

It's your standard, level-headed Tressel performance, though there's just some shit a football coach can't predict or take care of, like say, the shits. OL Steve Rehring, who was supposed to rotate in and see spot duty after missing two games to injury, had a problem with false starts no amount of coaching or scheming could prevent.

"He missed an 11-play drive," Tressel said. "He had to go to the restroom, and so he probably would have played closer to half of the time, but he missed an 11 and then he missed like a 10 (play drive)."

That's quite a restroom break.

"Well, there were multiple."

Hopefully, Rehring didn't blow a Power O-ring, and will be prepared to assume his proper duties blocking for Mark May's least favorite player in the universe, Terrelle Pryor. It's always nice to know that Tressel likes a good shit joke, that Skyline Chili is still fulfilling its role as human Dran-o, and that the Buckeyes are keeping the uncontrollable pants-crapping to the sidelines, and not letting it spread to the field.