Share All sharing options for: THE TONY FRANKLIN SPREAD: AXED

The Tony Franklin spread came to Auburn, a misbegotten experiment that in the process of teleportation from Troy to Auburn somehow acquired fly DNA along the way, and then began losing body parts until it became a raving, useless mass of receivers dancing 3 yard cha-cha routes and a quarterback lofting fungo-balls into the secondary. It was begging to be put out of its obvious misery, even with all the shiny Fred McGriff endorsements. 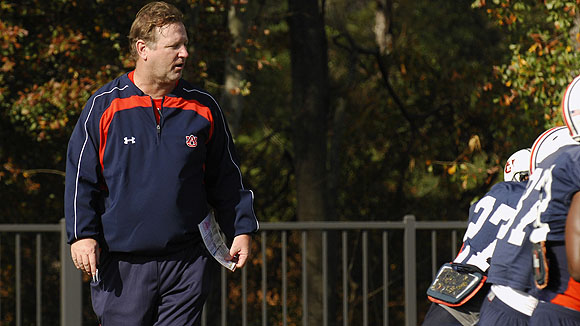 What you're doing there? Yes, see, the problem is that it sucks.

Tommy Tuberville has shotgunned the beast for the moment:

"We don't run Tony Franklin's spread offense," Tuberville said. "This is Auburn's offense. It's like our defense. We're going to run what works and what we're going to match up better with the other team. Everybody has to do that. You can't put a square peg in a round hole. Why would you do that?"

Auburn is currently 90th in the nation in total offense and 97th in passing, the backbone of Franklin's spread, so it's a mercy killing at this point. Their imminent switch to a more "Auburn fan-friendly" offense includes something called "the War Eagle" formation, which we'll guess is just the Wildhogrebel, but run with Mario Fannin, and does not involve anything so vulgar as passing more than one out of every ten snaps. Given that Ole Miss averages damn near nine yards a snap with the formation DAMMIT SHIT DAMMIT SHITFIRE DAMMIT, why not copy America's favorite aggravating high school formation gone feral?