AN IMPORTANT MESSAGE FROM A MEDICAL NON-EXPERT

Share All sharing options for: AN IMPORTANT MESSAGE FROM A MEDICAL NON-EXPERT

To speak to you today, we have invited a very special guest: Luther Campbell.

As the coach of the Miami Northwestern Junior Petit-Canes, the finest collection of nine to eleven year old football players in Dade County, I know what it takes to put a good football team together, to push your players to their maximum and get the most effort you can get out of your kids. I also know how to get the stains out of a white pair of pants, because they are young, and sometimes pee they pants from time to time.

They know how to take the field, though:

I also know how to keep a complainin' ass daddy's mouth shut, too. First, you tell him how his boy is doing fine, just fine. Then you take the second complaint quiet--reaaaaal icy, like stone, right? No expression. Then, later that night, you set his grass on fire with some gasoline. That shuts him up right quick.

Anyway, also consider myself an expert on a medical condition I have myself termed and named: The Bitch Mentality.

The Bitch Mentality strikes without warning. Scientists have not identified where it comes from, because it ain't Miami, where we tolerate no bitchness or bitcheraciousness. I do know where a severe case of it lives, and would like to point it out to you:

BITCH MENTALITY may infect the knee, since some knees clearly get bitchy. Frank Gore had bitch knee for years, and had to slap it down with surgery. Kirby Freeman had bitch arm, and he still ain't got treatment for that that worked worth a damn. Steve McNair even had bitch toe for years, and don't laugh: bitch toe will mess you up something nasty.

BITCH MENTALITY is at its most infectious, though, can spoll a whole team. And that is the topic today: the unstoppable bitch mentality of Tommy Bowden, who most definitely has a severe and untreated case of BITCH MENTALITY.

Let me explain: James Davis, your running back, is most definitely no bitch. He reminds me of Miami Northwestern great and current 13 year old Marvin Ellis, who runs a 4.3, hang cleans 350 pounds, and is already committed to Miami. It was clear from day one that Marvin was a Balla Unlimited with Gold Frontz and skills to match. Unlike his cousin Trevard, of course, who was obviously infected with the bitch mentality from the womb, since his mother cut the tires on my Yukon and left threatening messages on my voicemail when I sat her bitch-infected son at the end of my bench for refusing to block.

I hope your grass never grows back. EVER.

To get back to my discussion: James Davis clearly is no bitch. Neither is C.J. Spiller, who is so fast he might very well be able to play high school football here in the 305, and perhaps beyond. And yet, when you are ahead against Maryland, you see the destructive effects of the Bitch Mentality at its most infectious:

After gaining 195 first-half rushing yards, Clemson totaled 26 in the second half, when Maryland switched from a three-man to a four-man front to add another defender for run support.

On ten carries. All because fat old tub a grease Ralph Friedgen goes to a 4-3? AW YOU SCARED OF SOME LINEMAN NOW? In this situation, it would he easy to just blame Tommy Bowden for being the person he is, but that isn't scientifically accurate: you see, the only excuse for flipping your wig in this situation is an obvious case a BITCH MENTALITY, diagnosed by only giving the two most fearsome, playa tight ballaz on your team a grand total of ten carries when you've got a lead. 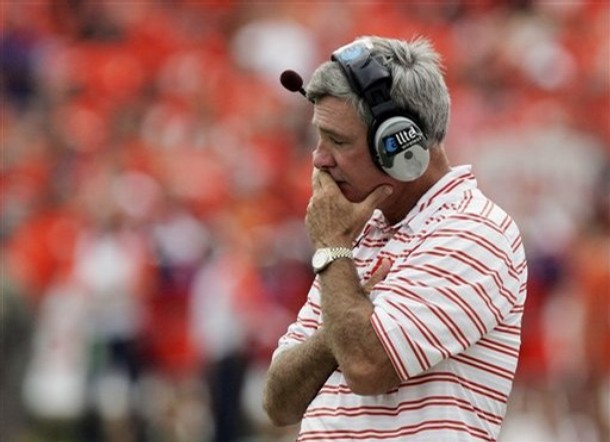 Head down, slumped posture, air of bitchedness: all symptoms of the Bitch Mentality.

Unfortunately, I've got bad news: there's no one cure for BITCH MENTALITY. See, it infects the corpus--you didn't think I was gonna use the word corpus? RACIST--in totality. From the bitch toes, to the bitch feet, and all the way up to the bitch ass cheeks, back, and bitch-ass face. It is a complete and total effect on the non-bitch parts of the body, and science has not defined what can stop it.

The good news? There are success stories. For example, Mack Brown beat his bitch mentality out of himself with the help of Vince Young, though he may be in remission now. Chris Leak suffered from bouts of bitch mentality, but overcame it to win a national title. Ohio State had a case, but Terrelle Pryor has all kinds of antibiotic, anti-bitchedness properties. See? There's hope. For Clemson, it would be letting the bitchosity-killing powers of James Davis and C.J. Spiller do the work.

For Trevard, though, they may be no solution, though pregame dancing has an antiseptic effect against infection from a team infested with BITCH MENTALITY. I hate to say this about a boy when he's just 13 years old, but BITCH MENTALITY got its claws deep there. That's a genetic case if I ever seen it. Now, if you'll excuse me, I have to buy some gasoline.

Luther Campbell, who performs professionally under the name Unkle Luke, is a rap impressario and reality television start in addition to being a successful Little League football coach. He holds no medical degree.