Mark Richt as a pitchman is a bit of a mixed bag in terms of execution. His best work probably appeared in the Michael Mann-esque slo-mo of his Ford truck commercials, a controversial piece of work given the deep, ongoing dirty war between Ford and Chevrolet factions in the deep South, and one for which he's undoubtedly suffered. ("I'm sorry, coach, but this is Chevy country, and if you listen hard enough you can hear Fords rusting at night. My son can't go to your school.")

His most moving and complicated work, though, was initially panned for what audiences saw as a mumbling, incoherent performance in "Carpets of Dalton 2: The Restapling."

Sometimes, the audience leads the artist; but in their best work, artists force the audience on a journey they might not want to take, a dark and intensely personal Dantean descent into a hell of their own making.

Clearly, thespian Richt has a mind to serve as your Virgil here, broaching the ninth circle of hell as we know it--carpet shopping--and tapping into the misery of a trapped soul with an emotional honesty too fiery and tinged with real sadness for most viewers to appreciate.

Richt spends most of the plot nodding and assenting to his wife, dragging her gently through the endless piles of samples, patronizingly examining the flooring she points out to him, nodding as she enthusiastically nails her lines about Carpets of Dalton's outstanding selection and convenience. She stands as an incandescent counterpoint to Richt's mumbling misery; Richt is a pre-breakdown Lester Burnham, pondering the void of his life behind the facade of the provider.

How do you know this is a quiet, plush American hell? The director tells you all you need to know in one chilling image juxtaposed with Kathryn Richt's chirpy dialogue: 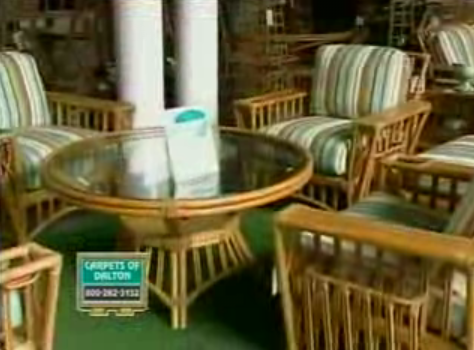 Rattan furniture; or, as we think of it, the tacky home of the flabby, misshapen ass of your deep, undying sorrow. The image then morphs into the "happy" couple walking through the store, frittering away the days of their lives in one endless spasm of forced happiness and subtle consumer gluttony.

"To get me here in one spot...and get everything done in one place...that was a good idea." When Richt utters this line, the halting delivery and mumbling volume reach into the viewer's chest and arrest the heart. In an instant, you have become Richt, and Richt has become you. In thirty seconds of postmodern theatre, Mark Richt the actor has become Mark Richt the artist--and he's taking you to hell whether you want to go or not. We, like the readers of Dante's great Inferno, are that much richer for the flames.