Welcome to our Factor Five Five Factor Preview of USC at Oregon State. 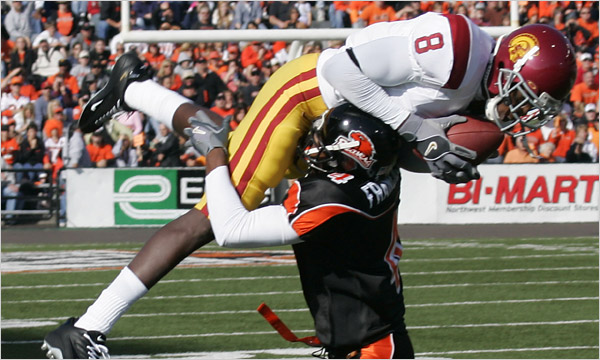 Category one: Nebulous Statistical Comparisons of Dubious Validity. USC has, to this point in an extremely young season after playing exactly two games, allowed ten points total to two offenses in dire straits: the overmatched and still-currently-on-fire Virginia Cavaliers and the pre-Terrell Pryor-takeover, Beanie Wells-less Buckeyes. Oregon State constitutes the best challenge USC has faced yet, a statement of limited utility thanks to the relative weakness of the first two opponents.

The utility of this statement may not increase much over the remainder of the season:

USC does not have a ranked team on the schedule for the rest of the year, though that could and likely will change as the Pac-10 recovers in the polls from an eminently shitty start to the season.

Hhhokay: Oregon is still ranked, as the Count points out below in the comments. But we're sure it's some kind of invitational ranking, like the one they extend to old golfers at the Masters', or maybe an allotment for "teams that are actually using their fifth-string quarterback MY GOD."

The Nebulous State of Dubious Statistical Validity for Oregon State: 438 yards per game. It's not like the Beavers aren't capable of production: it just all comes off the beefy arm of Lyle Moevao, who while adept at throwing himself into oncoming defenders on reverses is not so keen on carrying entire teams by himself. The Beavers have only 398 yards rushing on the season, something the Beavers cannot possibly live with after having a productive backs like Yvenson Bernard to set up play-action and eat clock late in games.

Category Two: Mascot: USC has Traveler, who is the symbolic mascot of the Trojans but not the nominal mascot of the team, who is actually the guy in armor who rides on the back of Traveler, and at one time even had a canine mascot named George Tirebiter. This all classifies the Trojans as one of those shameless teams who blatantly violate the rules of mascot parsimony. (See: Auburn.)

Benny the Beaver, meanwhile, plays a solo act and now appears in an ultramuscular bugeyed roid-era version of his former self. Go ahead and make a joke about his name being synonymous with vagina. From the latest photos we've seen of him, he's been hitting the heavy bag hard and is just dying to try out his Rampage Jackson imitation on you. (The one where Rampage knocks you out, not the one where he gets bugged out on meth and drives a monster truck into a car carrying a pregnant lady...we think.) 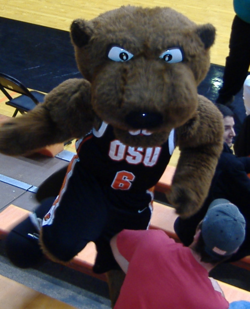 The third scariest Beaver you will ever see.

Category Three: Aura. An uncontested award of the aura edge goes to Pete Carroll, because Pete Carroll, unlike the workman Mike Riley, believes in auras and can see one right now, you beautiful little angel. Pete Carroll's original aura was a light blue-whitish, but he had it surgically removed and replaced with a red and yellow USC-themed just in case he met a talented recruit just chilling on the astral plane. Tressel's, btw? It's beige, and it's the only one of its kind.

When you touch it, it's cold to the fingers, like a glassy-eyed fish at the market on ice.

Category Four: Names. Both teams push with an impressive array of Polynesian vowel buffets, but Oregon State pulls home the award from the hands of the superlatively named Vidal Hazelton with a rock-solid run on double K's:

For gravy, just toss in Jacquizz Rodgers, and it's the only thing Oregon State really has a clear, quantifiable advantage in re: this game.

Grudges? Scores to settle? Sheer cussedness? Oh, just half a national title shot in 2006 ruined? Oh, and USC had a bye week before this! We're sure they just sat around catching up on some light reading and tanning, and not practicing maim-tackling on Oregon State dummies.

EDSBS FACTOR FIVE FIVE FACTOR PREVIEW SUM: 3-2, USC, You've Been Factor'd! The extremely scientific Factor Five Five Factor Preview is 1-2 on the season, but the equalizer falls like a hammer made of hammers tonight as USC should turn Oregon State into finally pate du castor tonight, which Pete Carroll would enjoy with a nice Gewurztraminer, not a Sauternes because he's no slave to convention like that.